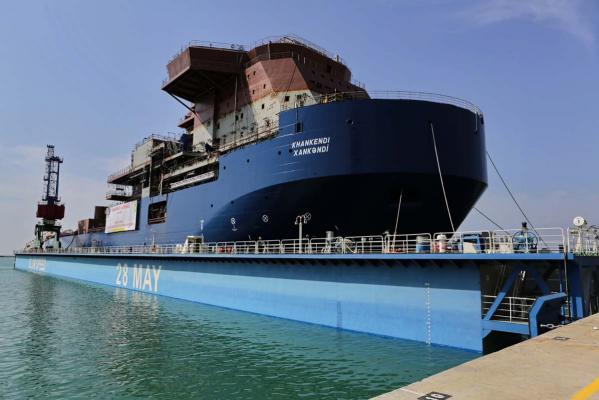 The Shah Deniz consortium is pleased to announce that the subsea construction vessel (SCV) "Khankendi" was recently re-floated into the Caspian Sea at the Baku Shipyard quay. The vessel has been specifically designed and built to install the subsea structures of the giant Shah Deniz Stage 2 gas development project.

This follows the safe transportation of the vessel's hull strips from Singapore to Azerbaijan and their successful integration with bow blocks built at the Baku Shipyard on the Caspian Sea. The Khankendi vessel is currently 80 percent complete and is on track for full completion by April 2017 when Shah Deniz Stage 2 subsea construction activities are planned to commence. Until that time the vessel will be docked at the shipyard quay for completion of the remaining construction and commissioning activities.

"The launch of the vessel out of the dry dock at the Baku Shipyard is an important milestone achieved by Shah Deniz Stage 2 project," Gordon Birrell, BP's Regional President for Azerbaijan, Georgia and Turkey, said. "The Shah Deniz consortium is proud to be involved in the construction of the Khankendi, which, we believe, marks a new era in the shipbuilding history of not only Azerbaijan but also the entire Caspian region."

"This flagship of the Caspian oil and gas fleet is designed to construct world-class subsea structures for the first time in the Caspian at the water depth of up to 550 meters," he said. "We look forward to the full completion and commissioning of the vessel when it will be deployed to the Shah Deniz area to commence subsea installation works for the Stage 2 gas development project".

The Khankendi vessel is planned to perform subsea construction activities on the Shah Deniz field between 2017 and 2027. The $378 million facility is a unique vessel built under DNV GL's (Norway and Germany) classification supervision. It is 155 meters in length, 32 meters in width and has a 13 meter main deck. The vessel will be equipped with dynamic positioning to allow working in 2.5 meter significant wave height (Hs), a 900 ton main crane for 600m subsea operation, an 18-man two-bell diving system, two work-class remotely operated vehicles (ROVs), a strengthened moon pool, two engine rooms with 6x4.4MW + 2x3.2MW generators and has a total weight of 17,600 tons and a carrying capacity of 5,000 tons at 6.5 meters draft.