Iran and Russia: The emergence of a new connectivity alliance Political and military events 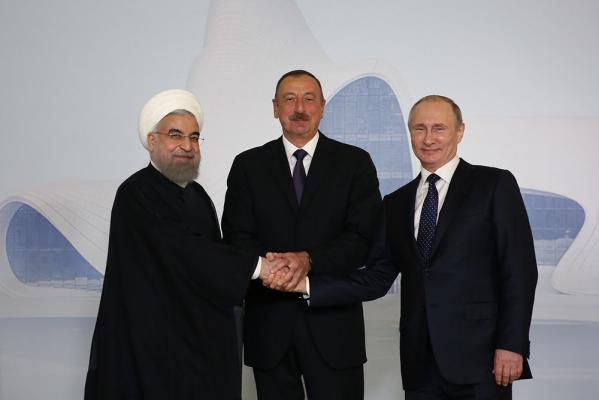 Iran, Russia and Azerbaijan’s trilateral summit to further strengthen cooperation in economy, energy and transport fields will be a step in the right direction to enhance connectivity, thus making the broader region more stable and secure.

For Iran, this is the proper development at the appropriate time.  Particularly, in the post-Joint Comprehensive Plan of Action (JCPOA) era, where the country’s leadership seeks the option to politically and economically multi-align itself with various partners. In fact for the Rouhani Administration, low oil prices also mean a new urgency for multi-aligning to rapidly diversify the country's economy, investing in modern infrastructure and building viable export sectors.
For Russia and Azerbaijan, Iran is the opportunity to access the grand prize along the Eurasian Silk Road.  And for some in Moscow, building further strategic ties resemble the modern version of Persian Corridor, but this time with trade and commerce as its main priorities.
This trilateral cooperation should be viewed beyond geopolitical competition for regional dominance and political influence in the volatile region of the Middle East.  It is the opportunity for competition to access Iran’s eighty million population.  And for both East and West, this means building as many Silk Roads to and beyond Iran as possible.
These interactions, in the post-JCPOA era, are clear indications that the growing ties between Moscow and Tehran are becoming more “strategic” as President Rouhani stated before he left for Baku to attend the trilateral summit.  An attempt by both Mr. Rouhani and his Russian counterpart to shift from tactical interest dominated by short-term appeal to a more calculated strategic formula of convergence of interests for both nations - Iran and Russia, principally designed around economic and commercial matters.
In recent years, it has become the foreign policy priority of the Islamic Republic of Iran to forge more strategic level partnerships and further develop viable cooperation on different regional and international issues to enhance stability and security in the Middle East region.   This trilateral platform distinctly illustrates that, Russian-Iranian cooperation is not weak and certainly not on limited basis due to divergence and short-sighted interests.  It is a coherent case of convergence of interests on regional and international issues dominated by economic necessities and trade priorities.
President Vladimir Putin has also indicated the convergence of interest by praising the successful cooperation between Moscow and Tehran, and has expressed hope that a free trade zone can soon be established between Iran and the Russian-led Eurasian Economic Union. Evidently, this trilateral cooperation is a major step to secure the most significant economic space in the global market - the Eurasian heartland.
There is no doubt that the North South Transport Corridor (NSTC) from India through Iran and Azerbaijan along the Caspian to Moscow and beyond will soon transform the economic space of Eurasia.
The Baku summit was a clear signal with the Tehran-Moscow Corridor. Iran is now closing the golden triangle, Beijing-Tehran-Moscow, which illustrates a major economic and geopolitical advancement.  This transport corridor will surely transform the economies of the entire Eurasia from Russia to the other Shanghai Cooperation Organization members. And will certainly put Iran on an expedited path to a full membership of this eastern club.  And today NSTC would make Eurasian trade 30% cheaper and 40% shorter than the existing routes.

For Iran, rightly so, it is all about competitive connectivity. As geostrategist Parag Khanna in his recent book, Connectography,  writes “Competitive connectivity is the arms race of the 21st century.”  And Iran in the post-JCPOA has joined the global connectivity revolution, in which far greater volume of lines connecting people that dividing them have been installed.  Therefore for Iran there is no better strategic investment than connectivity.

Today, North South Transport Corridor will make Eurasia smaller and its economy significantly larger.  With this corridor a new Middle East map is emerging.  Despite all the noise, we are seeing two types of countries emerging in the model Middle East, those that are attempting to multi-align and build modern infrastructure and those that are living on borrowed time as their infrastructure decays.  Today Iranian political leadership is beginning to recognize that prosperity is not sustainable without connectedness.  The Baku summit and North South Transport Corridor is a promising step forward to a more connected world.

Roozbeh Aliabadi is Advisor to Director of Strategic Initiatives at the Ministry of Foreign Affairs of Iran (IPIS) and Managing Partner at GGA - a business and political advisory firm.