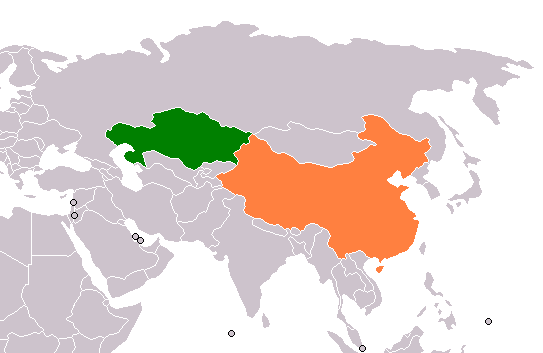 China and Kazakhstan, the two strategic partners, are planning to implement some 51 joint projects in different spheres of Kazakhstan’s economy, Kazakh President Nursultan Nazarbayev announced about this following his working visit to China, the president’s press-service reported.

He said that facilities for two large scale projects, implemented in automobile and oil processing industries have already been prepared, four more facilities worth $2.5 billion will be completed by the end of 2016, adding that joint Kazakh-Chinese Funds are operating to support the projects. The sides are planning to build joint facilities worth approximately $26 billion within five years.

The two neighbor countries signed four documents on cooperation during the meeting between Nazarbayev and his Chinese counterpart Xi Jinping in the city of Hangzhou.

The heads of two countries discussed a wide range of bilateral issues, including the prospects of strengthening cooperation in trade, investment, transit and transport, fuel and energy, as well as cultural and humanitarian spheres. In addition, the two leaders exchanged views on a number of the most pressing issues of regional and international agenda.

The parties also signed a Protocol on Amending the Agreement between the governments of the two countries on the establishment of the Committee for bilateral cooperation May 17, 2004 and a cooperation plan for adjunction of Kazakhstan’s development program "Nurly Zhol" and Chinese "Economic belt of the Silk Road" program.

The two countries are currently expanding their bilateral cooperation in all spheres. China is considered to be one of the major foreign partners of Kazakhstan. The trade turnover between the countries exceeded $10 billion, while investments of China in Kazakhstan amounted to $15 billion in 2015. Main spheres of investment include transport, warehousing, oil and gas, construction and minerals industry.

Moreover, Astana is also engaged in the creation of special economic zones that include the Khorgos dry port on the Kazakh-Chinese border. The port, which is expected to become one of the major cargo hubs of the new Silk Road has the capacity of 200,000 containers per year, while the figure is expected to reach 500,000 or some by 2020.

China was the major supplier of funds provided for the project. China’s Jiangsu province invested more than $600 million for developing the surrounding infrastructure in Kazakhstan.

Kazakhstan participated in G20 Summit as a guest country.  Next year marks the 25th anniversary of the establishment of China-Kazakhstan diplomatic ties.

China's economic influence in Central Asia has grown fast in the last decade in terms of regional trade. It has made deals worth tens of billions of dollars with Kazakhstan and other regional countries.

War and Peace: the 5 best tours to Tolstoy's Russia BBC ...

President Aliyev attends ceremony to launch passenger ships President of the Republic of Azerbaijan Ilham Aliyev has attended a ceremony ...