Why do we insist on the continental shelf in the Caspian Sea? Legal Issues 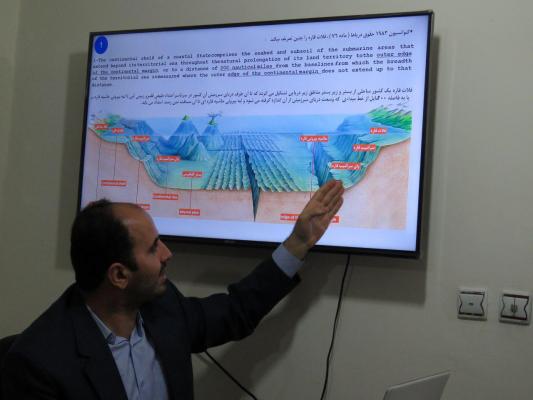 International Institute of Khazar Studies (IIKSS) - Countries have been looking for oil and other subsoil resources along their natural prolongation land territory that extends to the sea, when they were willing to exploit the continental shelf sector in the sea and high seas. Then they differentiate between different sections of the sea, such as territorial waters, exclusive economic zones, depths, and so on. So, we survey for some legal rule to help us achieve our goals.

According to the previous paragraph, we are seeing specific rules for different areas in sea. For example, the country's rights in territorial waters are considered as governing rights, but their rights in other zones, such as the exclusive economic zone or the continental shelf, are considered to be economic rights. We should know that delimitation of sea areas does not mean dividing the sea.

The rules and customs that arise from the public internaional law are:

1-    The disputed parties cannot extend their rights in the territorial area to other areas. Therefore, the parties do not have the same rights in territorial waters and continental shelf.
2-    The meaning of delimitation is not equal to the separation or division of the sea.
3-    The rights of countries in the continental region are not considered to be economic rights.
4-    Apart from the territorial waters and the fishing zone, according to the public international law, countries can claim continental shelf that extend at least 200 nautical miles.
5-    With regard to the previous point, with the exception of the territorial area and fishery zone, other section can be claimed by countries that have a relevant coast with disputed area.
6-    The Caspian Sea has three different sections that natural situation of each section leads to their special circumstances. Therefore, the southeastern section of the Caspian Sea is common and is a special disputed area between Iran, Turkmenistan and Azerbaijan.
7-    With the exception of the territorial waters and the fishery zone in the southern section of the Caspian Sea, other sectors that create the exclusive economic zone and the continental shelf, must be recognized as a common area to be delimited.
8-    In the delimiting process, no one can reject country's claim, unless it has a strong position against that country.
9-    The delimitation should be based on similar rules and factors that lead to a fair result. For this purpose, the delimitation procedure should follow the rules and customs that arise from the international law.

Some of the rules and customs reflected in the decisions of the International Court of Justice are:

A)    The length of the coast and the delimited area must have equal ratios.
B)    All countries should have fair shallow and deep areas.
C)    All countries should have fair and equal subsoil resources.
D)    Any subsequent contract cannot challenge or criticize previous contracts.
E)    The delimitation should be in accordance with the country’s security and with the security of its islands.
F)    To delimit the boundaries, must pay attention to the geographic realities.
G)    To delimit the boundaries, should use hybrid practices such as median line, equidistance line, and so on.
H)    We have to use a straight-base-line method to calculate base line length.

An Iranian Petroleum Ministry official says Iran and Turkmenistan have envisioned a $30bn barter deal in their economic exchange. The ...

IIKSS - Iran and Turkmenistan intend to boost their ties and level of cooperation in various fields of ...