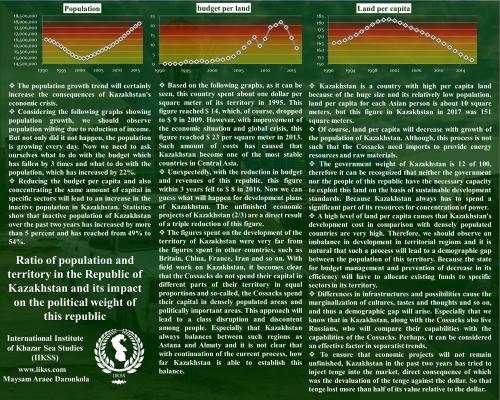 International Institute of Khazar Studies (IIKSS) – Kazakhstan is a country with high per capita land because of the huge size and its relatively low population. land per capita for each Asian person is about 10 square meters, but this figure in Kazakhstan in 2017 was 151 square meters. Therefore, we can say that each citizen of Kazakhstan has land and consequently has ground and underground resources on average 15 times more than one Asian person.

Of course, land per capita will decrease with growth of the population of Kazakhstan. Although, this process is not such that the Cossacks need imports to provide energy resources and raw materials. It should be noted that on the basis of various variables that make up the government weight and political weight, the government weight of Kazakhstan is 12 of 100, therefore it can be recognized that neither the government nor the people of this republic have the necessary capacity to exploit this land on the basis of sustainable development standards. Because Kazakhstan always has to spend a significant part of its resources for concentration of power. Naturally, in such a situation, a country like Kazakhstan, must spend a lot to create a security sphere or to satisfy its population. Of course, it is impossible to hide that the Kazakh national mood and Kazakh national identity began to grow in recent years and this issue led to mutual understanding and national unity.

A high level of land per capita causes that Kazakhstan's development cost in comparison with densely populated countries are very high. Therefore, we should observe an imbalance in development in territorial regions and it is natural that such a process will lead to a demographic gap between the population of this territory. Because the state for budget management and prevention of will have to allocate existing funds to specific sectors in its territory decrease in its efficiency. In such a situation, differences in infrastructures and possibilities cause the marginalization of cultures, tastes and thoughts and so on, and thus a demographic gap will arise. Especially that we know that in Kazakhstan, along with the Cossacks also live Russians, who will compare their capabilities with the capabilities of the Cossacks. Perhaps, it can be considered an effective factor in separatist trends.

To ensure that economic projects will not remain unfinished, Kazakhstan in the past two years has tried to inject tenge into the market, direct consequence of which was the devaluation of the tenge against the dollar. So that tenge lost more than half of its value relative to the dollar.

Based on the following graphs, as it can be seen, this country spent about one dollar per square meter of its territory in 1995. This figure reached $ 14, which, of course, dropped to $ 9 in 2009. However, with improvement of the economic situation and global crisis, this figure reached $ 23 per square meter in 2013. Such amount of costs has caused that Kazakhstan become one of the most stable countries in Central Asia. Unexpectedly, with the reduction in budget and revenues of this republic, this figure within 3 years fell to $ 8 in 2016. Now we can guess what will happen for development plans of Kazakhstan. The unfinished economic projects of Kazakhstan (2/3) are a direct result of a triple reduction of this figure.

It should be added that the figures spent on the development of the territory of Kazakhstan were very far from the figures spent in other countries, such as Britain, China, France, Iran and so on. With field work on Kazakhstan, it becomes clear that the Cossacks do not spend their capital in different parts of their territory in equal proportions and so-called, the Cossacks spend their capital in densely populated areas and politically important areas. This approach will lead to a class disruption and discontent among people. Especially that Kazakhstan always balances between such regions as Astana and Almaty and it is not clear that with continuation of the current process, how far Kazakhstan is able to establish this balance.

Reducing the budget per capita and also concentrating the same amount of capital in specific sectors will lead to an increase in the inactive population in Kazakhstan. Statistics show that inactive population of Kazakhstan over the past two years has increased by more than 5 percent and has reached from 49% to 54%. Ukraine has sent the draft agreement on establishment of the Baltic Sea-Black Sea-Caspian Sea international transport corridor to the Azerbaijani ...

For the first time ever, Kazakhstan is celebrating today the National Day of Dombra, Kazinform correspondent reports. The holiday ...