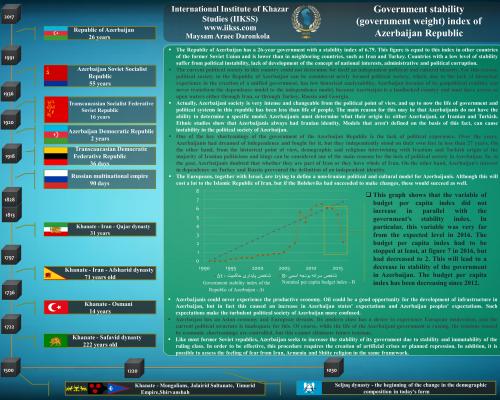 International Institute of Khazar Studies (IIKSS) – The Republic of Azerbaijan has a 26-year government with a stability index of 6.79. This figure is equal to this index in other countries of the former Soviet Union and is lower than in neighboring countries, such as Iran and Turkey. Countries with a low level of stability suffer from political instability, lack of development of the concept of national interests, administrative and political corruption. It is necessary to explain that the current political society in this country could not determine for itself an independent political and cultural identity. For this reason, political society in the Republic of Azerbaijan can be considered newly formed political society, which, due to the lack of historical experience in the creation of a unified government, has low historical analyzability. Azerbaijan because of its geopolitical realities can never transform the dependence model to the independence model, because Azerbaijan is a landlocked country and must have access to open waters either through Iran, or through Turkey, Russia and Georgia.

It can also be said that Azerbaijani society is very intense and changeable from the political point of view, and up to now the life of government and political systems in this republic has been less than life of people. The main reason for this may be that Azerbaijanis do not have the ability to determine a specific model. Azerbaijanis must determine what their origin is: either Azerbaijani, or Iranian and Turkish. Ethnic studies show that Azerbaijanis, who have Seljuki origin, always had Iranian identity. Models that aren't defined on the basis of this fact, can cause instability in the political society of Azerbaijan. Looking at their historical past, Azeris realize that they had an influential role in the Middle East when they were part of the Iranian society. So, most of the kingdoms in Iran in the last centuries were formed on their basis and even had spread in India. Of course, we are not talking about their re-annexation to Iran, but they, as an independent country and within the framework of a lasting alliance with Iran, can increase the opportunity of Iran and also significantly increase their opportunity.

In this regard, one of the key shortcomings of the government of the Azerbaijan Republic is the lack of political experience. Over the years, Azerbaijanis had dreamed of independence and fought for it, but they independently stood on their own feet in less than 27 years. On the other hand, from the historical point of view, demographic and religious intertwining with Iranians and Turkish origin of the majority of Iranian politicians and kings can be considered one of the main reasons for the lack of political society in Azerbaijan. So, in the past, Azerbaijanis doubted that whether they are part of Iran or they have whole of Iran. On the other hand, Azerbaijan's interest in dependence on Turkey and Russia prevented the definition of an independent identity.

In addition, the Europeans, together with Israel, are trying to define a non-Iranian political and cultural model for Azerbaijanis. Although this will cost a lot to the Islamic Republic of Iran, but if the Bolsheviks had succeeded to make changes, these would succeed as well. Azerbaijanis not because of their technology and economy, but because of their culture and race are considered Iranian and these two categories can be considered immutable facts.

It should be mentioned that Azerbaijanis could never experience the productive economy. Oil could be a good opportunity for the development of infrastructure in Azerbaijan, but in fact this caused an increase in Azerbaijan states' expectations and Azerbaijan peoples' expectations. Such expectations make the turbulent political society of Azerbaijan more confused, because it creates expectations for the current population, which cannot endure the difficulties of the 90s. Azerbaijan has an Asian economy and European dreams. Its modern class has a desire to experience European modernism, and the current political structure is inadequate for this. Of course, while the life of the Azerbaijani government is raising, the tensions caused by economic shortcomings are controlled, but this cannot eliminate future tensions.

Like most former Soviet republics, Azerbaijan seeks to increase the stability of its government due to stability and immutability of the ruling class. In order to be effective, this procedure requires the creation of artificial crises or planned repression. In addition, it is possible to assess the feeling of fear from Iran, Armenia and Shiite religion in the same framework.