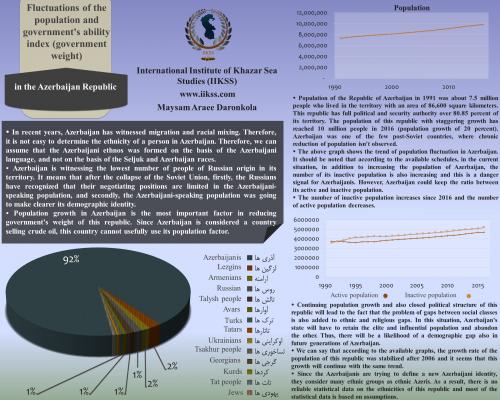 Continuing population growth and also closed political structure of this republic will lead to the fact that the problem of gaps between social classes is also added to ethnic and religious gaps. In this situation, Azerbaijan’s state will have to retain the elite and influential population and abandon the other. Thus, there will be a likelihood of a demographic gap also in future generations of Azerbaijan. We can say that according to the available graphs, the growth rate of the population of this republic was stabilized after 2006 and it seems that this growth will continue with the same trend. Since the Azerbaijanis are trying to define a new Azerbaijani identity, they consider many ethnic groups as ethnic Azeris. As a result, there is no reliable statistical data on the ethnicities of this republic and most of the statistical data is based on assumptions.

Population growth in Azerbaijan is the most important factor in reducing government's weight of this republic. Since Azerbaijan is considered a country selling crude oil, this country cannot usefully use its population factor.

The US President Barack Obama has a unique opportunity to assist in establishing peace between Yerevan and Baku which are ...