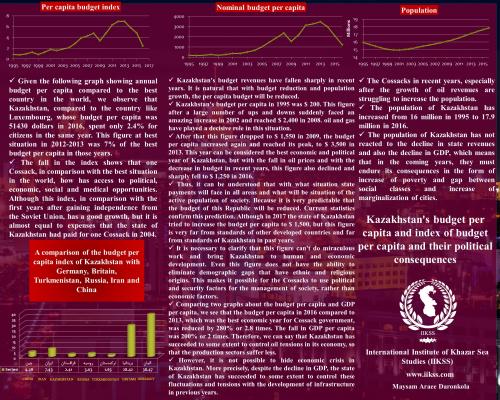 International Institute of Khazar Sea Studies (IIKSS) - A look at the demographic changes in the Republic of Kazakhstan shows that the Cossacks in recent years, especially after the growth of oil revenues are struggling to increase the population. So, the population of Kazakhstan has increased from 16 million in 1995 to 17.9 million in 2016. However, the population of Kazakhstan has not reacted to the decline in state revenues and also the decline in GDP, which means that in the coming years, they must endure its consequences in the form of increase of poverty and gap between social classes and increase of marginalization of cities.

The economic indexes of Kazakhstan show that Kazakhstan's budget revenues have fallen sharply in recent years. It is natural that with budget reduction and population growth, the per capita budget will be reduced. In such a situation, the Cossacks, despite maintaining the level of their expenditure, will have to cope with declining incomes. Statistics show that Kazakhstan's budget per capita in 1995 was $ 200. This figure after a large number of ups and downs suddenly faced an amazing increase in 2002 and reached $ 2,400 in 2008. oil and gas have played a decisive role in this situation.

After that this figure dropped to $ 1,550 in 2009, the budget per capita increased again and reached its peak, to $ 3,500 in 2013. This year can be considered the best economic and political year of Kazakhstan, but with the fall in oil prices and with the decrease in budget in recent years, this figure also declined and sharply fell to $ 1,250 in 2016. Thus, it can be understood that with what situation state payments will face in all areas and what will be situation of the active population of society. Because it is very predictable that the budget of this Republic will be reduced. Current statistics confirm this prediction. Although in 2017 the state of Kazakhstan tried to increase the budget per capita to $ 1,500, but this figure is very far from standards of other developed countries and far from standards of Kazakhstan in past years.

It is necessary to clarify that this figure can't do miraculous work and bring Kazakhstan to human and economic development. Even this figure does not have the ability to eliminate demographic gaps that have ethnic and religious origins. This makes it possible for the Cossacks to use political and security factors for the management of society, rather than economic factors.

Comparing two graphs about the budget per capita and GDP per capita, we see that the budget per capita in 2016 compared to 2013, which was the best economic year for Cossack government, was reduced by 280% or 8.2 times. The fall in GDP per capita was 200% or 2 times. Therefore, we can say that Kazakhstan has succeeded to some extent to control oil tensions in its economy, so that the production sectors suffer less. However, it is not possible to hide economic crisis in Kazakhstan. More precisely, despite the decline in GDP, the state of Kazakhstan has succeeded to some extent to control these fluctuations and tensions with the development of infrastructure in previous years.

The fall in the index shows that one Cossack, in comparison with the best situation in the world, how has access to political, economic, social and medical opportunities. Although this index, in comparison with the first years after gaining independence from the Soviet Union, has a good growth, but it is almost equal to expenses that the state of Kazakhstan had paid for one Cossack in 2004.

Time travelling to the mother tongue

Time travelling to the mother tongue The sounds of languages that died thousands of years ago have been brought to life ...

In an interview last month (August 16) with the media outlet Azeri Daily, Azerbaijani member of parliament and ...

Azerbaijan to cut oil production by 35.000 barrels per day