Nazarbaev's clenched fists: For Cossacks or economic reforms - (analysis of fluctuations in the Republic of Kazakhstan's ability (government weight) index) 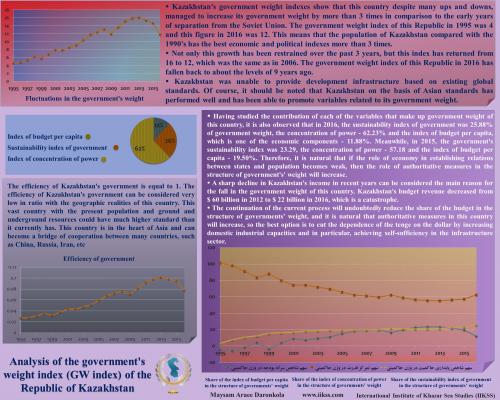 Nazarbaev's clenched fists: For Cossacks or economic reforms???!!!! (analysis of fluctuations in the Republic of Kazakhstan's ability (government weight) index)

International Institute of Khazar Sea Studies (IIKSS) - Kazakhstan's government weight indexes show that this country despite many ups and downs, managed to increase its government weight by more than 3 times in comparison to the early years of separation from the Soviet Union. The government weight index of this Republic in 1995 was 4 and this figure in 2016 was 12. This means that the population of Kazakhstan compared with the 1990's has the best economic and political indexes more than 3 times. This index in Azerbaijan in 2016 was 10.5 and in Russia - 12.5.

Of course, not only this growth has been restrained over the past 3 years, but this index has returned from 16 to 12, which was the same as in 2006. The government weight index of this Republic in 2016 has fallen back to about the levels of 9 years ago. Although it should be recognized that Kazakhstan was unable to provide development infrastructure based on existing global standards. Of course, it should be noted that Kazakhstan on the basis of Asian standards has performed well and has been able to promote variables related to its government weight.

The continuation of the current process will undoubtedly reduce the share of the budget in the structure of governments' weight, and it is natural that authoritative measures in this country will increase, so the best option is to cut the dependence of the tenge on the dollar by increasing domestic industrial capacities and in particular, achieving self-sufficiency in the infrastructure sector.

The efficiency of Kazakhstan's government is equal to 1, which is an undesirable. This figure in developed countries is higher than 1. In addition, the efficiency of Kazakhstan's government can be considered very low in ratio with the geographic realities of this country. This vast country with the present population and ground and underground resources could have much higher standard than it currently has. This country is in the heart of Asia and can become a bridge of cooperation between many countries, such as China, Russia, Iran, etc