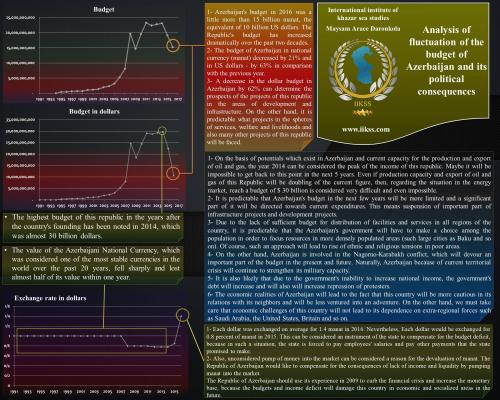 International institute of khazar sea studies (IIKSS) - Currently, the economy is one of the most important index of the assessment of countries and also one of the areas of competition between countries. The Ability and possibility of countries and their citizens also have a close relationship with budget per capita that the state spends on them. Because thus the level and extent of welfare and services which are provided to citizens and also the level and extent of citizens' economic efficiency are measurable.

As shown in the infographics below, budget of Azerbaijan Republic after strong growth in 2008, which had been caused by sale of oil through the Baku-Tbilisi-Ceyhan pipeline, has reached its maximum size and potential. It is natural that it is possible to see the impact of this growth on the situation and livelihoods, work, welfare, social security, services, infrastructures and all financial and non-financial sectors of this Republic. On the basis of the following schedules, as can be seen, the budget's growth means growth of budget per capita.

But then, with economic reforms there was a significant growth in these indices. This figure in 2010 increased to the level of 2008, and we have seen in this year a budget per capita of 2700 dollars and a budget per capita of 3200 dollars in 2011, which is unparalleled in Azerbaijan. But, contrary to expectations, these dream days for the Azerbaijani economy did not last, and for nearly three years this number remained at $ 3,100.

Thus, according to the existing figures, it can be said that budget and budget per capita of Azerbaijan are in a critical situation. Because since 2014, with the fall of oil prices, budget and budget per capita of Azerbaijan have decreased each year, and in 2016, this figure has surprisingly to 1100 dollar per person. More precisely, with regard to the decrease in Azerbaijan's budget, it can be assumed that with what catastrophic situation this republic will face in the sphere of the state economy. Even these tensions have also affected gross domestic product (GDP) of this republic. Because the graphs show that GDP per capita has fallen from $ 8,000 in 2014 to $ 3,800 in 2016, which is roughly equal to its size in 2006.

Amid ongoing tensions with the US, Moscow and Tehran are embarking on naval cooperation ...