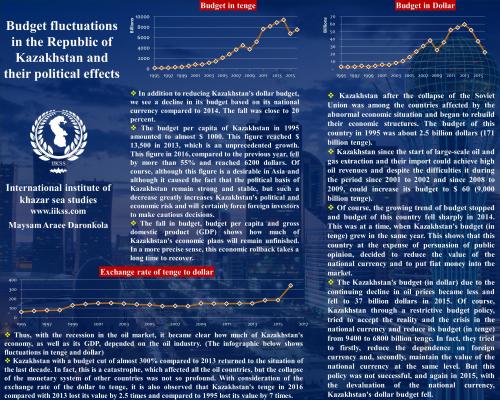 International institute of khazar sea studies (IIKSS) – Kazakhstan after the collapse of the Soviet Union was among the countries affected by the abnormal economic situation and began to rebuild their economic structures. The budget of this country in 1995 was about 2.5 billion dollars (171 billion tenge). Kazakhstan since the start of large-scale oil and gas extraction and their import could achieve high oil revenues and despite the difficulties it during the period since 2001 to 2002 and since 2008 to 2009, could increase its budget to $ 60 (9,000 billion tenge).

Of course, the growing trend of budget stopped and budget of this country fell sharply in 2014. This was at a time, when Kazakhstan's budget (in tenge) grew in the same year. This shows that this country at the expense of persuasion of public opinion, decided to reduce the value of the national currency and to put fiat money into the market.

The budget per capita of Kazakhstan in 1995 amounted to almost $ 1000. This figure reached $ 13,500 in 2013, which is an unprecedented growth. This figure in 2016, compared to the previous year, fell by more than 55% and reached 6200 dollars. Of course, although this figure is a desirable in Asia and although it caused the fact that the political basis of Kazakhstan remain strong and stable, but such a decrease greatly increases Kazakhstan's political and economic risk and will certainly force foreign investors to make cautious decisions.

The fall in budget, budget per capita and gross domestic product (GDP) shows how much of Kazakhstan's economic plans will remain unfinished. In a more precise sense, this economic rollback takes a long time to recover. Thus, with the recession in the oil market, it became clear how much of Kazakhstan's economy, as well as its GDP, depended on the oil industry. (The infographic below shows fluctuations in tenge and dollar)

Kazakhstan with a budget cut of almost 300% compared to 2013 returned to the situation of the last decade. In fact, this is a catastrophe, which affected all the oil countries, but the collapse of the monetary system of other countries was not so profound. With consideration of the exchange rate of the dollar to tenge, it is also observed that Kazakhstan's tenge in 2016 compared with 2013 lost its value by 2.5 times and compared to 1995 lost its value by 7 times.

Turkmenistan spends over $5B on construction in 2016

IIKSS - Turkmenistan commissioned 202 facilities with a total worth of over $5 billion in 2016, the Neutral ...