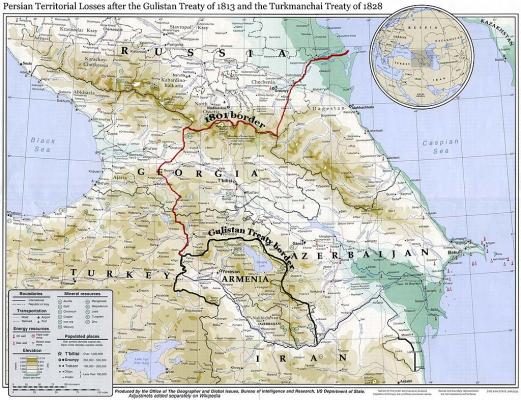 With the intention to cease horror of the war and re-establish steady peace and well-wishing friendship neighborhood shared by Russia Empire and the State of Iran since the ancient times, The GLORIOUS and the GREAT EMPEROR and RULER of All Russia HIS MAJESTY the EMPEROR and the Head of the State of Iran, HIS MAJESTY the King, for fair purpose of saving and caused with deep love to their homagers, appointed their underwritten authorised Representatives:

The Emperor of All Russia HIS MAJESTY appointed HIS General-lieutenant Nikolay Rtishev- the Chief commander of forces in Georgia and Caucasus line, the Chief of the Civil Affairs in the governors of Astrakhan and Caucasus and Georgia, the Chief of all Border Affairs about Georgia, the Commander of Caspian Navy, the owner of the orders of the Saint Alexander Nevski, the first Saint Anna, the forth rank Saint Martyr and the order of Skilled Georgy, the owner of gold sword with the script for courage. His Majesty king of Iran appointed his extreme ambassador in Turkish and English Palaces, High-rank Respectful Mirza Hasan Khan-distinguished among Iranian chiefs, awarded with a set of dagger and sword decorated with brilliants, shawl cloth and horse accessories decorated with brilliants, the Close Homager of his King, the Councillor of Secret Affairs of the Supreme Iran Palace and the second Khan in Iran Palace from Vizier family. Met in Karabakh in the village of Gulustan near the river Zeyva, exchanged our warrants, carefully studied everything related with peace and friendship to be re- established on behalf of our GREAT LEADERS and by the force and the Supreme authority given to us, WE -the abovementioned Representatives adopted and forever affirmed the following:

As both of the Supreme States mutually agreed to re-establish peace basing on the primary relations ( ), i.e. by preserving lands, khanates and properties they already had, today and in the future to identify the borderline between the Empire of All Russia and the State of Iran as follows: Adinabazar-straight through Mugan lowland-Yeddibulag passage-up to the joint of the river Kapanak with Araz-along the right bank of the river Kapanak to Mehri chain- along the boundaries of Karabakh and Nakhchivan khanates-the chain of Alagoz mountains-the boundary of Daralayaz joining to the boundaries of Karabakh, Nakhchivan and Iravan khanates and part of Yelizavetpol (former Ganja khanate) region- along the boundary separating Iravan khanate from Yelizavetpol district, Gazakh and Shamsaddin lands to the boundary of Eshekmeydan-the mountain chains- the right bank of the river in the direction of the stream-the road of hamzachiman-the chain of Pambak mountains- the boundary of Shuragol-mountain chains till Arpachay along the passage between Mastaras and Artikin. For the reason that the territory of Talish passed around during the war, for more fairness, the boundaries of that khanate at Zinzeley and Ardabil will be determined by mutually selected Commissars (under the Chief Commanders they are to give the exact and detailed description of the lands, villages, valleys, rivers, mountains, lakes and national boundaries under the real disposal of the parties), after this treaty concluded and signed. The
boundaries of Talish khanate then ( ) should be determined in such a way that each party can remain the owner of its lands. If something remains aside the determined above boundaries, each party ( ) will give guarantee after the Commissars of the both Supreme States analysis.

To prove friendly attitude to the MAJESTY of All Russia EMPIROR, on behalf of himself and HIGH SUCCESSORS of IRAN THROWN HIS MAJESTY King solemnly accepts that the following belong to the property of Russian Empire: Karabakh khanate and Yelizavetpol province(former Ganja khanate), the khanates of Sheki, Shirvan, Derbend, Guba, Baku and Talish (territories under Russian Empire), Dagestan, Georgia (together with the province of Shuragol), Imperiya, Guriya, MIngrelia and Abkhaziya, and all the properties and lands between established Caucasus line borderline (with people and lands related with the Caspian).

To express friendship attitude to HIS MAJESTY Shah of Iran and to confirm his wish about stable autocracy and sovereign government in Iran- his neighbor, HIS MAJESTY the EMPIROR of All Russia, on behalf of himself and his successors, promises to render a Successor, till he is appointed the heir of the state by the King, necessary assistance that no foreign forces could interfere the State Affairs of Iran and that the Iran palace could strengthen with help of Supreme Russia Palace. If there is any conflict appears among the sons of the King on the State Affairs of Iran, the Empire of Russia will not interfere until the call of the King at the power.

Russian trade ships of preserve the right to sail near the Caspian shore and to moor them and Iran will help Russia in shipwreck. Iran shares the same rights. As to public vessels, they sailed under Russia's flag before the war and during the peace. In the frames of the same respect, Russia preserves the former right and no other country may use it flag in the Caspian but Russia.

Hostages of from the both parties, Christians and the population of other religion are to be released within three months of the date Treaty concluded. Each party should supply the hostages with food and with fare till Garakilsa (the place where borderline chiefs create mutual relation for delivery of the hostages). Each escaped by himself, or escaped violation the law despite of his nationality, has the freedom to return his Motherland without any force. The both parties shall give amnesty to the escaped or pardon them.

In addition to all the abovementioned HIS MAGESTY THE EMPEROR of All Russia and the Majesty of King of Iran, demand to mutually receive Ministers or the Ambassadors of THEIR Supreme Palaces as deserve their rank and tasks. The suite of Representative or Consuls appointed for protection city trade should nor exceed ten person. As authorized officials, they should have deserved for their position respect and honor. According to the Injunction nobody has right to harm them and if there is any, the citizens of the both parties shall be fairly judged.

As to commercial relations between the citizens, having the written documents given by the government or appointed officials by it, which prove that they are the merchants or the citizens of Russia or Iran, the visit to the both Supreme States -the parties of the agreement- by land and through the Sea is free. It is also free to remain there, to send there merchants, to leave there without any delay, to send and exchange goods brought to Iran from Russia and from Russia to Iran. To clinch possible arguments between the merchants of the both Supreme States and the claims on their duties and so on, are looked upon by Consul or Representative and in the case of their absence to local official. They shall take fair position, supply the payment or demand necessary persons to do that and prevent them from harm and oppression.

The Russian merchants visiting Iran have free movement to other states having friendly relations with Iran. For this purpose Iran has supply those merchants with necessary passport to supply them free travel. The same process is applicable to Iran merchants in Russia and its friends.

If any of Russian citizens visiting Iran died, all his inheritance and other properties are delivered to their family or near relatives. Those relatives have right to sell those properties for their own profit. Despite of belonging to any state all this process is implemented on legal base without concealing and appropriation of those properties, as regulated in Russian Empire and other cultural states.

The merchants of the both States (the parties of the treaty) are free at shores, ports or in the bordering cities to sell their goods and buy or exchange with other goods without permission from custom office they are subordinated to or obligators. This aims at free commercial circulation and at legal duties voluntarily and constantly to be taken from the seller and the purchaser for state treasury.

After this treaty signed, the representatives of the both Supreme States shall mutually and quickly inform the necessary information and order to cease the military operation everywhere.

Composed of two copies (with its translation to Persian), signed by the abovementioned Representatives of the Supreme parties, ratifies with their seal and mutually exchanged this eternal Peace treaty shall be re-established and solemnly Ratified by the hands of his MAJESTY the EMPIROR of All Russia and his MAJESTY king of Iran.

The ratified copies of the Treaty shall be mutually delivered from the Supreme Palaces to the abovementioned Representatives after three months.

The Treaty was concluded on the 2nd of October eighteen thirteen, by Iran calendar on the 29th of Shavval in twelve twenty-eight at Russian armed camp in the village of Gulustan near the river Zeyva of Karabakh.

The Representative and the Chief Commander Georgia Nikolay Rtishev