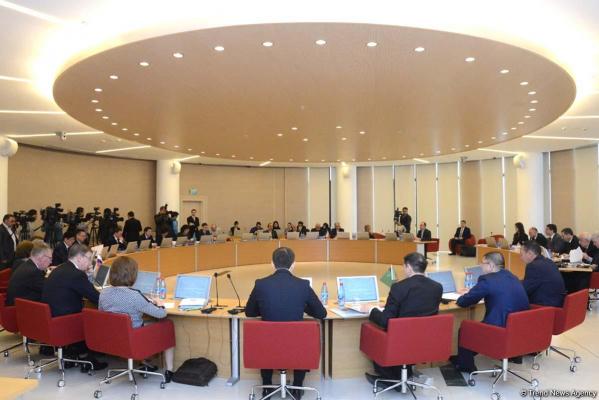 Speedy signing of the convention on the status of the Caspian Sea will contribute to cooperation of the littoral states, Azerbaijan's Deputy Foreign Minister Khalaf Khalafov said Apr.5.

He made the remarks during the meeting of the special working group for working out the convention on the legal status of the Caspian Sea with participation of deputy foreign ministers.

Azerbaijan attaches great importance to the agreements on delimitation of the seabed signed between Azerbaijan, Kazakhstan and Russia, according to Khalafov.

The deputy minister noted that all the issues related to the legal status of the Caspian sea should be resolved based on respect for the sovereign rights of states and mutually beneficial partnership.

The issues related to the sovereignty and jurisdiction which are on the agenda of today's meeting, require detailed and comprehensive discussions, he added.

The Caspian Sea plays an important role in transportation corridors and is an important part of international and regional projects, according to Khalafov.

"During the negotiation process, major work was carried out to agree on the provisions of the draft convention on the legal status of the Caspian Sea, as well as various areas of cooperation between the littoral states," said the deputy minister.

Azerbaijan has already ratified all the agreements inked during the 4th summit of the heads of state of the Caspian littoral states, he added.

Fulfillment of the agreements signed by heads of the Caspian Sea countries remains the priority of the negotiation process on the legal status of the sea, according to Khalafov.

The success of the work on the five-sided agreement on the draft convention mainly depends on the continuation of a constructive exchange of views in the negotiations process, he added.

Khalafov said that the discussion of certain issues in the format of exchange of views between experts is a positive experience for reaching general agreements.

The issues related to strengthening the international cooperation, improving the investment climate for developing and transportation of energy resources to world markets, creation of reliable and secure communication, attracting highly profitable and environmentally friendly technologies are of special importance, according to the deputy ministers.

It is planned to hold the sixth meeting of the parties to the Framework Convention for the Protection of Marine Environment of the Caspian Sea in Baku, said Khalafov, adding that opening of the permanent secretariat of the framework convention will be one of the main goals of the conference.

"Azerbaijan has worked out the draft agreement on placing the secretariat in Baku and presented this draft to all the Caspian Sea countries," he said. "We emphasize the importance of developing a common position regarding the further activities of the secretariat."

The Caspian Sea states (Azerbaijan, Kazakhstan, Russia, Turkmenistan and Iran) signed a Framework Convention for the Protection of Marine Environment of the Caspian Sea in November of 2003.

Russia and Kazakhstan signed an agreement on the delimitation of the northern part of the Caspian Sea in order to exercise sovereign rights for subsoil use in July of 1998. The two countries signed a protocol to this agreement in May of 2002.

Moreover, Kazakhstan and Azerbaijan signed an agreement on the delimitation of the Caspian Seabed and a protocol to it on Nov. 29, 2001 and Feb. 27, 2003, respectively.

Additionally, Kazakhstan, Azerbaijan and Russia signed an agreement on the delimitation of adjacent sections of the Caspian Sea on May 14, 2003.

At home, despite the heat

At home, despite the heat Migratory birds including flamingoes and pelicans have stayed put at the famous Chilika Lake ...