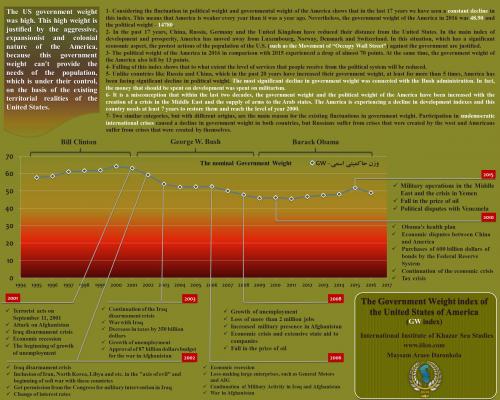 IIKSS – Recently, we again observed the arrival of Republicans to power in the US and based on this were presented numerous analysis about the present situation and the political future of the US. With the advent of Trump, America's aggressiveness has increased significantly and there is a fear that in the not too distant future there will be another conflict anywhere in the world. Accordingly, in the medium-term, it is necessary to consider what influence do US measures have on the current situation in this country. Therefore, considering the political weight index and the government weight index of the United States of America, we study current behaviors of this country. In this regard, it should be noted that America is one of the active players in the Caspian region and the Middle East and is considered a traditional rival of Russia, so we must consider the international situation of this country.

The latest existing studies on the political weight index and the government weight index show that this country for the last two decades has faced a constant decline in political weight and government weight. This index, which was determined and extracted on the basis of numerous variables, such as economic, political, geopolitical and demographic ability, sharply decreased with the beginning of the Republican Administration of George W. Bush in 2001. The adventures of the US government, which began with the invasion of Afghanistan and are continuing in other regions of the world, can be considered the main reason for decrease in political weight. During this time, the distance of economic indexes U.S. (including welfare and non-welfare) with European welfare states has become large and significant increase in this distance in the near future is predictable.

But it is interesting that public opinion believes that America's military actions and arms sales to Arabs caused an increase in US revenues. In fact, it should be noted that the United States of America with regard to capital investment in the military sector and investments in the Middle East, have ignored investments in domestic infrastructure, the consequences of which have been well seen in American society at the present time. So that the class division in this country has reached an unprecedented level.

Based on the fluctuations in U.S. government's Weight, it can be recognized that in the last two decades a secure environment has been established in this country and economic relations between population and government have been weakened. It is natural that in current situation the state is forced to use more authorities in its relations with other domestic and international actors. Based on the following infographic, it can be predicted that America, as it has witnessed numerous demographic discontinuities, is looking for a new crisis in order to suppress the economic demands of its people with the creation of a state of emergency. In addition, America with the creation of a state of emergency and for the purpose of monitoring the population, has given more powers to security services to hide its economic decline. It should also be noted that all countries with high government weight cannot, based on their territorial realities, provide needs of their existing population, so it is predictable that such countries in order to ensure their future needs, need to achieve stable and sustainable resources. The US is also no exception to this rule and has a long history of firm and soft dominance over resources and fields in other parts of the world. Accordingly, in the last century there have never been changes in the public's behavior of these states. If these countries are not aggressive, then they will be doomed to destruction.

But it cannot be denied that America, despite its high governmental weight in the world, has faced serious and significant decline in this index and day by day is moving away from the standards of well-being and economic standards that exist in prosperous countries. It is predicted that with the continuation of such situation in 10-15 years, the economic power of this country will be significantly weakened and anything other than military force will not remain with dreamy America in the last decade. It should also be noted that demographic gaps, which as a rare phenomenon were created in America, have the potential to become the platform for the collapse of the United States.

The following infographic clearly shows the fluctuations in political weight and government weight of the US with a mention of the factors that affect them.

Translator: Mohsen Hamidi - expert and member of the Scientific Council of the International Institute of Khazar Sea Studies (IIKSS)

Kazakhstan's business roadmap to be extended for another 5 years

The Business Roadmap 2020 program will be extended until 2025, Kazakh President Nursultan Nazarbayev said in his annual message ...

Iran at the Crossroads of The Eurasian Land-Bridge

Iran at the Crossroads of The Eurasian Land-Bridge May 27—With the recent historic visit to Tehran of Indian Prime Minister Narendra ...

Azerbaijan agrees with Russia on international status to another border checkpoint

IIKSS - Azerbaijan has agreed with Russia on the assignment of international status to one more border checkpoint. ...

Azerbaijan will start issuing electronic identity cards of a new generation starting from September 1. To obtain the document, ...