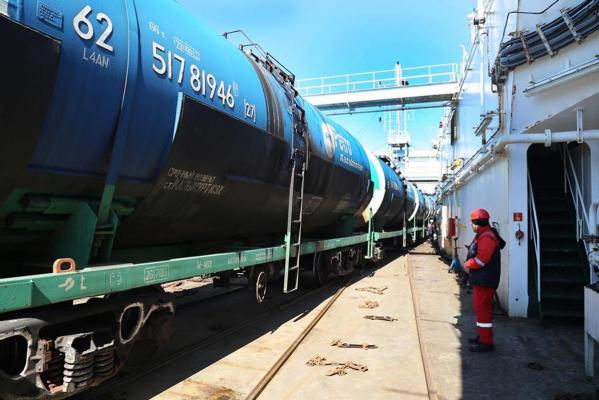 IIKSS- The first cargo has arrived at the Baku International Sea Trade Port from Kazakhstan’s new port Kuryk, reads a message from Azerbaijan Caspian Shipping CJSC.
Freight cars were sent from the Kuryk port Mar. 24 on the Barda ferry, belonging to the Azerbaijani company, and they arrived at the Baku International Sea Trade Port in Alat the next day.
“Management of the Kuryk port observed the mooring of the Barda ferry and the process of loading of the cars, both of which proceeded successfully,” said the message.
The Kuryk port with a total area of 40 hectares is located on the Trans-Caspian international transport route, which is of great importance for handling the cargo going via this route.
“The role of the Kuryk ferry complex will significantly increase in the future. Infrastructure work is ongoing in the port’s territory. Currently, construction of another berth for Ro-Ro and Ro-Pax vessels is underway there,” reads the message.
The new complex is located closer to the Baku port, than the Aktau port, through which transit was carried out previously.
“Voyage from Kuryk to Baku takes 18 hours, while from Aktau it takes 22 hours,” said the message.
“Experience of Azerbaijani seamen and the Baku International Sea Trade Port was taken as a basis during the construction of the Kuryk port. It is also noteworthy that the first vessel sent from Kuryk was the Azerbaijani ferry Shahdag, which was sent in the test mode on Dec. 7, 2016.”
Azerbaijan Caspian Shipping CJSC is the sole operator of ferries in the Caspian Sea.