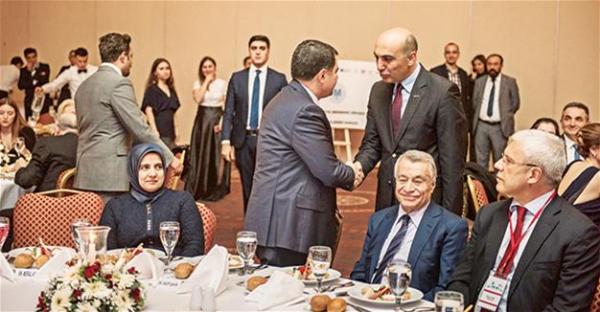 IIKSS- The Trans-Anatolian Natural Gas Pipeline (TANAP) project is important, especially for Turkey, Georgia and European countries, as it will reduce dependence on other gas resources from places such as Russia, according to Azerbaijan’s energy minister.
“The TANAP project is important not only because it supplies a significant volume of gas but because it is a guarantor of regional and especially European energy security,” said Azerbaijani Minister of Industry and Energy Natiq Aliyev at the 20th Eurasian Economic Summit in Istanbul on April 5.
“The project will contribute to the Georgian and Turkish economies because these are transit countries and will receive revenues,” he said, adding that the project was especially important for Turkey with regards to reducing its dependency on Russian gas.
“For Turkey it is even more important not because of the modest transit revenue but the fact that the additional 6 billion cubic meters [bcm] of Azerbaijani gas will help reduce the 58 percent dependence on Russian gas,” Aliyev said. “Besides, it is relatively cheaper than Russian and Iranian gas.”
The 20th Eurasian Economic Summit, which is organized by the Marmara Group Foundation, brings together more than 200 statesmen, academics, and businessmen with representatives from 44 countries and religious functionaries in Istanbul on April 5-6.
The TANAP project aims to bring natural gas, produced from Azerbaijan’s Shah Deniz II gas field and other areas of the Caspian Sea, primarily to Turkey, but also to Europe via the Trans Adriatic Pipeline (TAP).
TANAP is part of the Southern Gas Corridor Program, which, in addition to TANAP, includes the development of the Shah Deniz II gas field in Azerbaijan; an expansion of the South Caucasus Pipeline across Azerbaijan and Georgia to Turkey; and the TAP, which will carry the gas through Greece and Albania and under the Adriatic Sea to southern Italy.
The project is slated to come online in 2018 with an initial capacity to carry 16 bcm of Azeri gas through Georgia to Turkey. While 6 bcm will be for Turkey’s domestic consumption, the rest is destined for transfer to Greece, Albania, Italy and further into Europe.
Aliyev said April 5 that the TANAP project had the distinction of being one of the world’s largest energy projects and that the project activity would be realized within 49 years.
Commenting on the construction of the project inside Turkish territories, the energy minister said “TANAP [in Turkey] is moving forward with precision in keeping to budget in time.”
He said that they had recognized a strong support and commitment of the Turkish government in keeping the Southern Gas Corridor the priority of the country.
Recently in February, the World Bank and Turkey’s gas grid BOTAŞ signed a $400 million financing deal for the TANAP project.
“As can be seen the energy projects [which] connected Azerbaijan, Turkey and Georgia laid the foundation of the trilateral cooperation. Today this strong cooperation shows its benefits in the implementation of each three projects of Southern Gas Corridor without any delays,” Aliyev said.