When the Russian bear wakes up? Political and military events 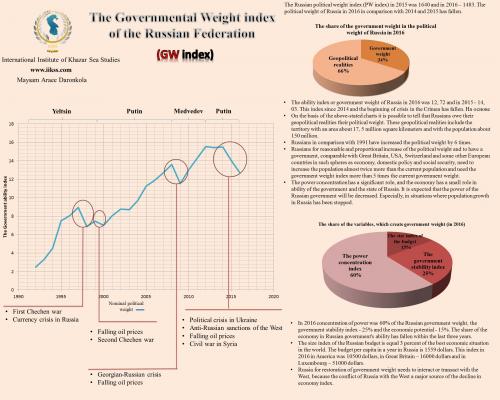 When the Russian bear wakes up
The analysis of the government ability index of Russia (the government weight)
IIKSS- Russia is one of the strongest countries in the world, of course, an important part of this vision roots in existence of nuclear weapon and the powerful fleet and in a roar of tanks and fighters of Russia that drive sleep from eyes of each opponent. The analysis of the political weight index and government weight of Russia puts facts in front of our eyes, which based on these facts, we cannot ignore important and fundamental weaknesses of this Federation. The following charts show that the weaknesses of the Russian government in political and economic management are rooted in what. On the basis of the fluctuation in the following chart, Russia needs to restore the government weight and it seems that most factors of decrease in political weight and government weight of Russia are rooted in the way of interaction of this federation with the West. It seems that in the nearest future the Russian bear will wake up and it will be natural that this country will define new factors to settle an internal situation and to correct the state relations with the population.

Kazakhstan's business roadmap to be extended for another 5 years

The Business Roadmap 2020 program will be extended until 2025, Kazakh President Nursultan Nazarbayev said in his annual message ...