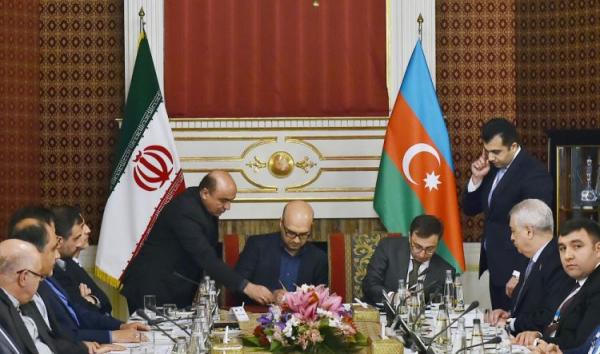 IIKSS- Iran’s President Rouhani described relations between the Islamic Republic of Iran and the Republic of Azerbaijan friendly and strategic.
“Relations between the two countries has been developing since three years ago with regard to political ties and regional and international issues,” Rouhani  said.
“In economic and cultural fields, we have also had growing relations and we must continue our efforts in this regard,” said the President in a joint press conference with the President of Azerbaijan, Ilham Aliyev on Sunday in Tehran.
He also said: “The volume of trade in the last 10 months of the current [Iranian] year between Tehran and Baku indicates that the two countries are on the path of deepening and cementing inclusive ties”.
He went on to refer to Iran and Azerbaijan’s important role in South-North transit, and said: “Azerbaijan will cooperate in constructing Rasht-Astara railroad and the two countries will cooperate with each other in starting Rasht-Astara transit line”.
On readiness by the two countries to cooperate in energy fields, he said: “The Islamic Republic of Iran is ready for oil and oil products swap from Azerbaijan to the south waters and we hope to witness more effort by the two countries in this regard”.
“The two countries have had good relations in the field of joint ventures, as well as manufacturing cars and we hope that the joint plans start soon,” Rouhani continued.
He mentioned Caspian Sea and added: “Keeping Caspian Sea unpolluted and environmental concerns about the lake is very important for the two countries and we discussed about it in our meetings today.”
President Rouhani also mentioned some other issues related to Caspian Sea such as the legal regime and using oil resources and said that the issue was discussed in the meetings.
Stressing the importance of tripartite Iran-Azerbaijan-Russia, Iran-Azerbaijan-Turkey, and Iran-Azerbaijan-Georgia dialogues, and said that in the first two, good measures had been taken.
On regional issues, he said: “Iran and Azerbaijan have very close views about regional issues and both countries consider terrorism as derived from Wahhabism and Salafism, which is a great threat for the region. We both believe that the ideas and thinking of terrorism must be eradicated from the region for ever”.
Stating that both countries have close views about Syrian and Iraqi issues, he said: “In the discussions, we expressed hope that Iran, Russia and Turkey’s cooperation with each other yield a final result and we both believe that the ultimate solution to the Syrian issue is political way”.
“The Islamic Republic of Iran believes that the territorial integrity of countries must be respected and the issues of the region must be resolved through political ways and dialogue. Therefore, we hope that the Karabakh issue settles through dialogue,” Dr Rouhani continued.
The President of Azerbaijan, Ilham Aliyev also said in the press conference that Tehran-Baku ties are based on common culture, religion and history of the two nations.
He said: “The Republic of Azerbaijan seeks to establish deep and durable ties with the Islamic Republic of Iran”.
Appreciating Iran for its efforts aimed at resolving the Karabakh issue, he said: “Iran’s efforts is based on respecting the territorial integrity, justice and fairness and we value this”.
He went on to refer to the 70% increase in trade between the two countries and the North-South corridor, saying: “This is a historic and very important action, which is beneficial for not only the two nations, but also the whole region”.

By Maksim Tsurkov - Trend: Some $696.1 million has been allocated since the beginning of construction to finance the construction of ...