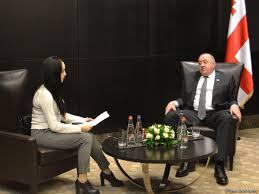 IIKSS- Relations between Azerbaijan and Georgia are perfect, said Georgian President Giorgi Margvelashvili, who is on a visit in Azerbaijan, in his interview with Trend.
“We have total understanding and respect of each other. At the same time, we have common understanding of region and not only region, but I would say the region at large,” he noted.
Margvelashvili said that Georgia and Azerbaijan started partnership as soon as they became independent states 25 years ago.
“At that time, our leaders Heydar Aliyev and Eduard Shevardnadze had a very clear vision of how this partnership should develop and how this partnership should influence the future of the region,” he noted adding that involving Turkey in this partnership has provided opportunities for Azerbaijani oil to be directed to European markets.
“Our countries grow, our common mission in a much harmonized manner creates opportunities not only for Georgia and Azerbaijan, but it engages major trading partners,” said the Georgian president. “Now, we have an efficient partnership involving the Caspian and Black Sea regions. More and more countries join this partnership.”
“I have discussed with President Ilham Aliyev the transit opportunities presented by the Persian Gulf and Iran,” he noted. “We have an active engagement in Afghanistan through the Caspian region.”
Margvelashvili went on to say that all the joint projects, including TAP and TANAP, the Baku-Tbilisi-Kars railway, the active projects that Georgia has on the Black Sea coast have grown into a partnership of Black and Caspian seas, which will further grow with active engagement of China with the ‘One Belt, One Road’ concept.
This is the partnership that in the future will unite Asian and European markets, so it has great prospects, he said.
It is important that Georgia and Azerbaijan from the beginning had a common vision of this strategic goal, added the Georgian president.
Economic relations
“Azerbaijan is our second trade partner and the number one investor into the country. So, opportunities are there; these opportunities can only grow,” said Margvelashvili. “Of course, in 2015-2016, our region was economically affected by slowdown in economy, because of economic complications in our neighborhood. But our opportunities are recovering and they are only growing.”
“We are looking into the future and we discuss the future projects,” he noted adding that Georgia and Azerbaijan give each other opportunities of free partnership and free trade.
Georgia has free trade agreements with Europe, Russia, Turkey, ex-Soviet republics, said Margvelashili, adding that “now we will have free trade with China. These opportunities will be just growing.”
He went on to add that Georgia has lots of opportunities for investing.
“Georgia has energy sector, energy producing sector, Georgia has great opportunities in agriculture. Georgia has opportunities in logistics, in tourism. I think we can do a lot. I think Azerbaijan also has great opportunities not only in energy sector, but also in agriculture and tourism, and I think our business will have much bigger achievements,” noted the Georgian president.
Energy
Speaking about the SGC project, Margvelashvili said that “the progress on the Southern Gas Corridor is there. We are building it. Through this project we will become a real contributor to the EU’s energy security system.”
The project will have tremendous influence on the stability of our region as well, he added.
Transport projects
Touching upon the BTK railway project’s construction, Margvelashvili said that “the Georgian and Azerbaijani parts of the Baku-Tbilisi-Kars railway are finished. We are waiting for our Turkish partners.”
Turkey has a complicated landscape in the parts where this railway runs, noted the Georgian president.
“We are hoping that we will finalize the project in the middle of this year. The project will have enormous trading opportunities,” said Margvelashvili. “It will be a faster and harmonized trading route between Europe and Asia.”

Tehran, Feb 29, IRNA – Director General for Europe, America and Caspian Sea Neighbors in the Ministry of ...

Yanase emphasised that Japanese companies are interested in investing in Kazakhstan. As of the first quarter, trade between the ...