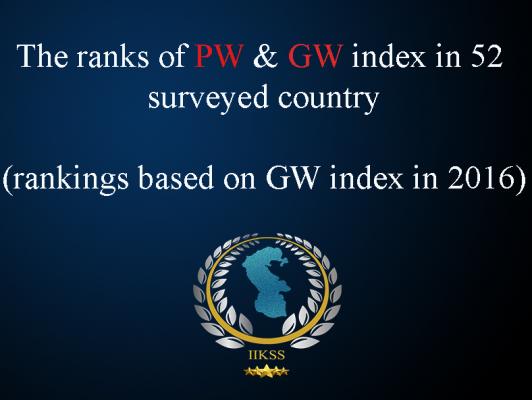 The Political weight (وزن سیاسی) or PW index is an index that shows the geopolitical and eco-political situation of a country. A political index is a tool used to study country economic factors (especially government budget) with attention to population and territory. The PW index involves various independent variables such as geopolitical, mental, economic and political measures.

The PW index by quantitation of qualitative entity, try to study some process of change and phenomena like as state behavior, population reaction and macroeconomic factors in countries. Then so by “PW” index can predict the behavior of countries.[2] “PW” index for the first time is defined and developed in IIKSS institution by Dr.Maysam Araee Darunkola.

Political Weight has a complex formula, because every variant of PW must be calculated with a subsidiary formula.

The PW index formula is

The following tables shows us Political weight and governmental weight or “PW” and "GW" index of countries in 2015 and 2016. (rankings based on GW index in 2016)