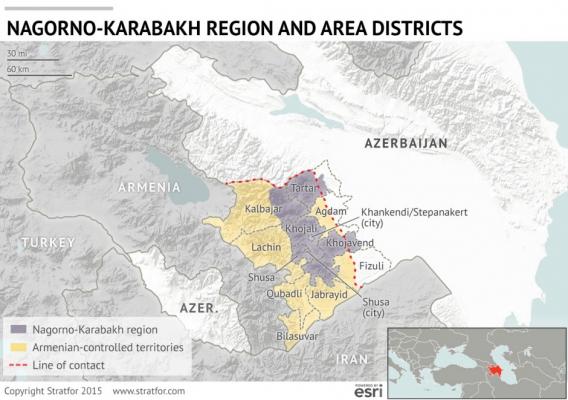 The arc of instability amid the oil rich Southern Caspian and the Middle East made the South Caucasus region another stage for geopolitical struggles. The Nagorno-Karabakh conflict is a small, but a key block of this arc. Armenia, Azerbaijan and Russia have been involved in conflict since its very beginning. Initially, between 1988-1994, Armenia gained the upper hand and contributed to the establishment of the so-called Nagorno-Karabakh Republic.

It’s an independent, but unrecognized state established on the basis of the Nagorno-Karabakh Autonomous region, populated by mainly Armenians, of the former soviet Azerbaijan republic. As a result, Yerevan wants to maintain control of Nagorno-Karabakh. Azerbaijan seeks to regain control however, even by military means. Russia’s direct interest is to avoid escalation in the conflict near the southern border.

Moscow systematically calls for negotiations between the two sides. However, there are a number of crucial differences between Armenia and Azerbaijan. Armenia has a modern history of the cooperation with Russia and 5,000 Russian troops are deployed in the Russian military base in the country. In the new millennium Azerbaijan had been moving closer to Turkey and the US. Simultaneously, Azerbaijan made all efforts and used a good share of oil revenue to build up the national military forces.

Baku’s defense expenditures rose to the point that they eclipsed Armenia’s entire national budget. Azerbaijan made reclaiming Nagorno-Karabakh an official priority, but refrains from military operation because of Russian response in the full-scale peace-enforcement action in the region. In recent times, the relations between Azerbaijan and the EU became cooler and Baku even allowed itself diplomatic demarches. The relations with the US are friendlier. On the one hand, Baku seeks from the US money, political support, and technologies. On the other hand it can’t abandon domestic stability, fruitful relations and trade with Russia and the progressive construction of a multinational prosperous state, as its declared aim.

IIKSS - In a move to improve the appeal of Turkmenistan’s airports for international airlines, the country’s authorities ...