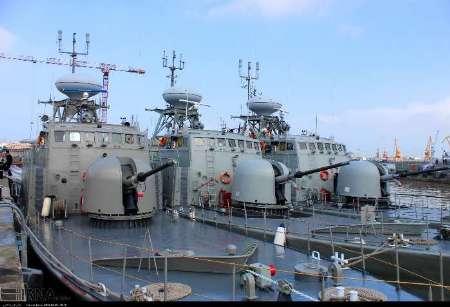 IIKSS- ‘Peace and Friendship’ flotilla of Iranian Navy who had left Iranian waters for Russia two days ago, berthed at the port in the Russian city of Makhachkala late on Thursday.
A flotilla of Iranian Navy vessels, including Damavand destroyer and Derafsh missile-launcher destroyer, dubbed as ‘Peace and Friendship’ fleet that left Iranian northern waters on Tuesday arrived at the Russian port of Makhachkala, the capital city of the Republic of Dagestan, in Russia on Thursday.
The Iranian naval forces were welcomed by the Russian Caspian flotilla officials, as well as the administration of Makhachkala and the Republic of Dagestan. The welcoming ceremony was held after the Iranian fleet was escorted to the port by the Grad Sviyazhsk, the Uglich and the Velikiy Ustyug corvettes.
The visitors are scheduled to enjoy sightseeing and sporting events at the Russian port, according to the commander of Iran's fleet of warships in the northern province of Gilan, Admiral Ahmad Reza Bagheri.
This is the fourth visit of the Iranian Navy to the ports of neighbors by the Caspian Sea; 3 visits to Russian naval bases since 2013 and one to Azerbaijan. In June 2013 and October 2015, the Iranian forces visited the port of Astrakhan.
After the welcoming ceremony, the commanders of ‘Peace and Friendship’ flotilla of Iranian Navy and the commanders of the Caspian Flotilla of Russian Navy met at the officers club of Damavand destroyer.

Anar Aliyev has been appointed head of the Office of Ministry of Labor and Social Protection of Population of ...