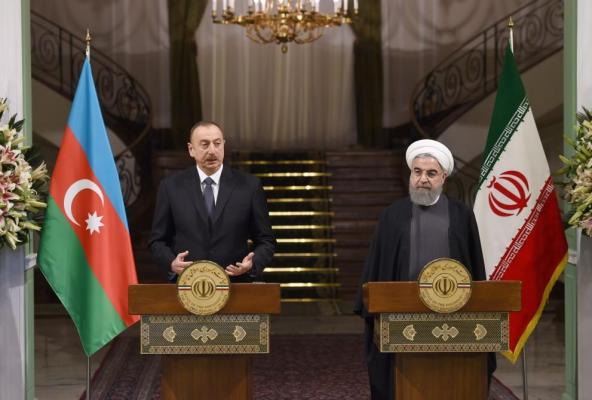 IIKSS- The recent visit of Azerbaijani president to Tehran as well as signing of several important documents showed an eternal friendship between the two neighboring countries.
President Ilham Aliyev paid a one-day official visit to Iran on March 5 at the invitation of his Iranian counterpart Hassan Rouhani, during which they highlighted developing relations and stressed the significance of high-level reciprocal visits in developing bilateral cooperation.
The visit comes as the eighth between President Aliyev and his Iranian counterpart Hassan Rouhani in the past four years, considering the fact that the two heads of state also met in a trilateral meeting with Russia recently.
"These visits show relations between the two countries are progressing proudly," said Ilham Aliyev. “Our relations have been built on ancient history, culture and common religion,” he said. “We have established very good cooperation on this solid basis. Our political relations are at a high level and we support each other in all international organizations.”
The head of state expressed gratitude to Iran for its position on the Armenia-Azerbaijan Nagorno-Karabakh conflict settlement on the basis of the territorial integrity and sovereignty of Azerbaijan. “This position is based on the international principles, laws and justice. Each country's territorial integrity is inviolable," he said.
Making joint statement for the press with Iranian counterpart, President Aliyev said that cordial bilateral ties are rooted in cultural, historical and religious commonalities, pointing out good results achieved in the economic sphere.
He said that the North-South Transport Corridor project, which is being jointly implemented by Azerbaijan and Iran, is a historical event.
“This project also makes great contribution to regional cooperation. The number of trilateral formats is increasing in the region. Great success has been achieved in the energy sector. We connect our power lines and are making exchange,” said President Aliyev.
He further noted that there are good opportunities for cooperation in the oil and gas sector.
“Iranian company is an active participant and investor of the Shah Deniz 2 project. There was held a broad exchange of views today for carrying out joint oil and gas operations in the Caspian Sea,” said President Aliyev. “I would like to especially mention the activities of the joint economic commission. The commission operates very actively and executes all orders of presidents in time and at the high level.”
“Our trade turnover has grown by more than 70 percent last year. This is the result of the agreements reached,” said Ilham Aliyev, citing 18 MoUs signed in recent years.
“Two additional documents have been signed today. This creates a strong legal framework for our relations. The Iranian side has begun making investments in Azerbaijan and we are grateful for that,” added President Aliyev.
Azerbaijan has also mobilized great volumes of financial resources for construction of Rasht-Astara railway, added the president.
“A year ago, I said in this hall that Azerbaijan will build its railway up to the Azerbaijani-Iranian border in 2016. We have achieved that. It is already a reality. Even a railway bridge has been constructed and commissioned over the Astara River. The first train has recently crossed the border through the newly-built bridge,” said Azerbaijan’s president.
Hassan Rouhani hailed relations with neighboring Azerbaijan as “friendly, brotherly and strategic,” saying they share close views on regional issues.
Rouhani, said Iran is ready for swapping oil and oil products with Azerbaijan, Iranian PressTV reported. He also touched on transit cooperation, saying their recent completion of a rail road linking the Iranian city of Rasht to Astara in Azerbaijan had marked an important step in this regard.
In their talks, the two sides also discussed cooperation on environmental issues as well as the Caspian Sea legal regime. The sea is shared by Iran, Azerbaijan, Russia, Turkmenistan and Kazakhstan.
"Legal issues over the Caspian Sea require the consensus of the five countries. In this context, cooperation, consultation and negotiation between Iran and Azerbaijan are very important," Rouhani said.
Signing the documents between Azerbaijan and Iran was held with the participation of the two presidents, where the parties inked "Memorandum of Understanding between the Financial Markets Supervision Chamber of Azerbaijan and the Financial Intelligence Unit under the Ministry of Economic Affairs and Finance of Iran on Cooperation in Fighting Against Terrorism Financing and Legalization of Criminally Obtained Funds or Other Property" and “Memorandum of Understanding between the Financial Markets Supervision Chamber of Azerbaijan and the Financial Intelligence Unit under the Ministry of Economic Affairs and Finance of Iran on Cooperation in Fighting Against Terrorism Financing and Legalization of Criminally Obtained Funds or Other Property".
Within the framework of the visit President Aliyev also met with Supreme Leader of Iran Sayyid Ali Khamenei, where the head of state said Azerbaijan-Iran ties have been very well developing over the last years.
He pointed out excellent relations between the two countries in political, economic and other fields. "Azerbaijan and Iran actively support each other within international organizations."
In turn, Ali Khamenei said his country attaches great importance to cooperation with Azerbaijan. He stressed the significance of increasing mutual trade.

Research and educational project, the Kazakh Studies, has been launched in Kazakhstan

Research and educational project, the Kazakh Studies, has been launched in Kazakhstan. As part of it, Kazakhstan’s ethnic ...