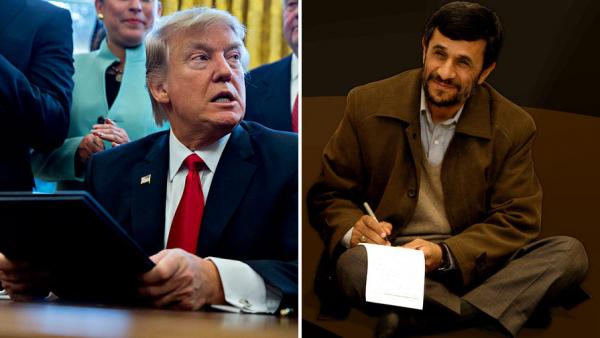 IIKSS- Iranian former political leader Mahmoud Ahmadinejad took pen to paper to issue a scathing assessment of the United States and President Donald Trump, telling the commander in chief in mocking tones that he’s right, America’s electoral system is rife with corruption.
The letter comes amid rising U.S. tensions with Iran, just as the regime’s navy launched drills at the mouth of the Gulf and the Indian Ocean and just after Trump set Tehran “on notice,” warning his new administration was going to be a lot tougher than Barack Obama’s.
Some in Iran see a likeness between Ahmadinejad and Trump, because both rose to power in shock elections that were marked by populist tones. The liberal base in American, meanwhile, has been putting Trump forth as a misogynist, racist, anti-Muslim zealot who wants to reel back time to the point of clamping freedoms for women, for progressives and for all those of minority status – a ridiculous viewpoint that nonetheless furthers comparisons with dictators like Ahmadinejad.
In his letter, published in both English and Farsi on his personal website, Ahmadinejad wrote: “Your Excellency [Trump] has truthfully described the U.S. political system and electoral structure as corrupt and anti-public.”
But he then slams Trump’s so-called ban on Muslims – another skewed truth that paints the president’s attempt to slow immigration from terror hot-spot countries as a bigoted ban on an entire religion.
“The presence and constructive effort of the elite and scientists of different nations, including the million-plus population of my Iranian compatriots, has had a major role in the development of the U.S.,” Ahmadinejad wrote. “The contemporary U.S. belongs to all nations.”
Ahmadinejad then refuted those who say Islam disrespects women while sliding in a subtle jab at Trump’s reputed negative showing with women.
“The great men of history have paid the highest level of respect to women and recognized their God-given capabilities,” he wrote.
Trump has taken a tough tone on Iran.
Right after Tehran went forward with a ballistic missile test on Jan. 29, Trump warned Iran was playing with fire, and the United States was keeping its options for response all on the table.
Iran’s Revolutionary Guard commander, meanwhile, ratcheted tensions further in recent days by admitting its Islamic followers had infiltrated America’s soil and were currently hiding in terror cells, awaiting the order to strike, according to the Gateway Pundit.
In a video that just made the social-media rounds, Islamic Republic strategist Hassan Abbassi said: “I’ll be brief. We have 2 million Iranians [in America]. Be certain that I will raise a guerrilla army from amongst them against you. You know this well. Look at how vulnerable you were on 9/11 when four Arabs who don’t know how to fight managed to endanger your foundations.”

Russia delivers over 1,5 tons of humanitarian aid to Syria

Russia delivers over 1,5 tons of humanitarian aid to Syria   Russia delivered more than 1,5 metric tons of ...