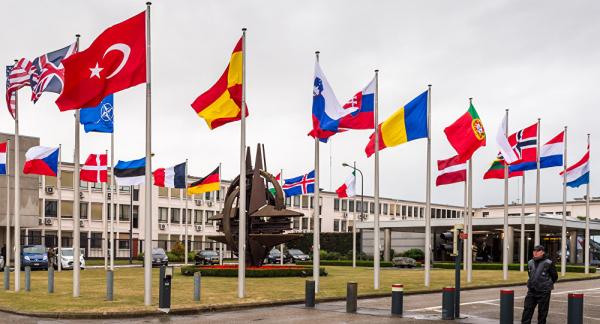 IIKSS- Residents of four NATO member states would prefer a military alliance with Russia, if their countries were attacked. This is evidenced by results of a global survey conducted among residents of 66 countries by sociologists from WIN/Gallup International.
Russia was chosen by residents Bulgaria, Greece, Slovenia and Turkey as the main guarantor of their security. In case of an attack, all these countries want to see Russian forces fighting on their side, the survey revealed.
The poll comes as US Defense Secretary James Mattis threatened to cut US defense commitments unless all NATO members met the spending target.
Worth noting is that the Bulgarians and the Greeks called Turkey their main security threat, although the latter is also a member of NATO and should theoretically be considered an ally.
Apparently, the Turkish occupation of northern Cyprus in 1974 showed that these countries can't rely on the protection of the Western military alliance, Bloomberg noted, adding that this could be one of the reasons why they chose Russia.
Cyprus has been partitioned since 1974, when Turkey occupied the island's north, later proclaiming the Turkish Republic of Northern Cyprus (TRNC) there. TRNC is recognized only by Turkey, which maintains its military presence there.
Although residents of many other countries expressed their desire to have the US on their side, researchers noted that people started to respond to geopolitical changes, altering their perceptions of Washington as a global leader.
For instance, the Chinese have chosen Russia as their favorable ally, while the Russians, in their turn, preferred to work with the Chinese.
According to the vice president of WIN / Gallup International, Kancho Stoychev, the outcome of the poll shows that the US policy over the last 20 years has led to a rapprochement between Moscow and Beijing.
Russian and Chinese officials have repeatedly said that the bilateral ties have reached a peak in their entire history, noting that the relations are of strategic importance.
In his turn, the Dean of the School of Economics and Science at the University of St. Gallen, James Davis, believes that the results of the survey also demonstrate a religious division in Europe. For instance, Greeks and Bulgarians have chosen Russia, because all three countries are Orthodox Christian.
Another reason behind a more cautious attitude toward the US among Europeans is their controversial military activities in the countries abroad.
After the US military campaign in Iraq, fewer Europeans believe that the United States should play the role of a global leader and with the election of Donald Trump as the US president the confidence of EU citizens in Washington has decreased even more, the expert concluded.
New US President Donald Trump criticized the alliance he called "obsolete" on numerous occasions during his election campaign, calling it obsolete and vowing to make all members pay their fair share.
Only a handful of NATO members have reached the 2-percent target as of 2016. The United States is the top spender, allocating over 3.6 percent of its GDP on defense, followed by Greece, the United Kingdom, Estonia and Poland. The remaining 23 members are below target.
NATO's overall European defense spending fell at rates of around 2 percent per year until the 2014 Wales summit. In 2015, spending increased 0.6 percent before surging 3 percent in 2016, according to official NATO data.