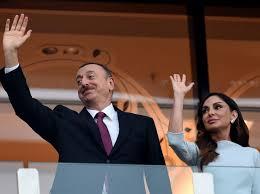 IIKSS- Mehriban Aliyeva's appointment as the First Vice-President of the Republic of Azerbaijan was a verified decision of President Ilham Aliyev, the Deputy Chairman of of the State Duma Committee for Information Policy, Information Technologies and Communication, Alexander Yushchenko, said speaking to the correspondent of Vestnik Kavkaza.
In the first place, the deputy recalled how much Mehriban Aliyeva has done to promote a positive image of Azerbaijan in the international arena. "I am actively watching what is happening in Azerbaijan, the republic's development, and who is making a special effort for this purpose. And I see Azerbaijan's spectacular representation on the world and, in particular, the European stage.  I mean the first European Games in Baku, the Eurovision-2012 contest and last year's Formula 1 Grand Prix. All of these global events have been carried out at the highest level," he stressed.
Already due to this, such a high appointment of Mehriban Aliyeva as the head of the organising committees of all the prestigious events in Azerbaijan was absolutely logical. "I know how much she has done for all of this. I also know about her role in the country's social life, so the fact that she became the first vice-president is just bringing of the Azerbaijani legislation into line with the reality that exists in the country," Alexander Yushchenko believes.
The MP praised President Ilham Aliyev's commitment to do what was needed, despite the expected criticism from abroad. "Nobody in the current globalized world wants a strong independent state - they need only puppets, performing the will of others. In this regard, we see pressure on Azerbaijan. I guess that 'Democracies', seeking to impose all kind of their own models of the state system on us, will start criticizing Ilham Aliyev in connection with this appointment. I would like to emphasize that this decision is especially personal and sovereign right of the state and its head," he said.
Alexander Yushchenko also added that Mehriban Aliyeva's appointment as the First Vice-President was supported by the majority of the Azerbaijani population. "This decision was based on the opinion of people. I think that Ilham Aliyev based it on various opinion polls, so that it was a verified decision, aimed at the development of Azerbaijan and taken with the support of the people," the Deputy Chairman of of the State Duma Committee for Information Policy, Information Technologies and Communication concluded.