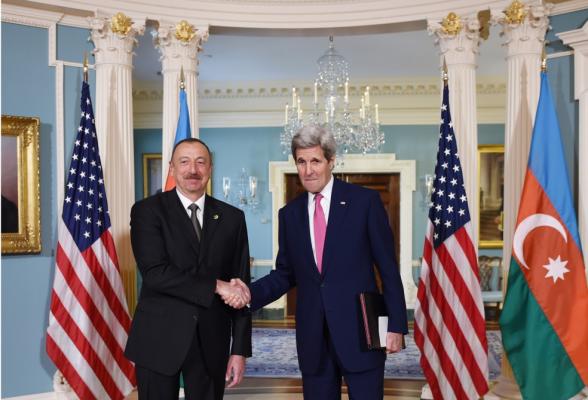 President of the Republic of Azerbaijan Ilham Aliyev has met with the United States Secretary of State John Kerry.

Prior to the meeting they made remarks for the press.

Welcoming the attendees, John Kerry said he was happy to meet Azerbaijan's president.

"We have a lot of mutual interests that we are currently working on. We’re very grateful to Azerbaijan’s contributions to peacekeeping, their efforts in Afghanistan. Obviously, Azerbaijan is located in a complex region right now and I think President Aliyev has been very studious and thoughtful about how to respond to some of those needs, particularly with his leadership on the Southern Gas Corridor. This is a very important step with respect to Europe’s long-term strategic interests, and frankly, to try to diversify the sourcing of energy, which is important," Kerry said.

He further noted that Azerbaijan and the US share other interests in counterterrorism.

"We want to see an ultimate resolution of the frozen conflict of Nagorno-Karabakh that needs to be a negotiated settlement and something that has to be worked on over time," Kerry said. But right now, I want to thank the President for his presence here for the Nuclear Security Summit and for the many courtesies that he has shown recently as he moves to adjust the economic opportunity for Azerbaijan as well as the security relationship with the region."

President Ilham Aliyev in turn thanked John Kerry and US President Barack Obama for invitation to the nuclear summit.

"We consider it as a sign of friendship and partnership," Ilham Aliyev said. "We highly value our bilateral relations. U.S.-Azerbaijan relations have already a long history of 25 years, and these relations always were very close, cordial, and now they are relations of strategic importance."

The president further said that Azerbaijan and the Us have very active political dialogue.

"As Mr. Secretary already said, we met many times before but first time here in Washington. We have economic cooperation, which is developing. U.S. companies invested more than $10 billion in our economy, which is also a good sign of economic cooperation and good sign of economic development of our country. We jointly implemented such important projects as construction of oil pipelines connecting Caspian and Mediterranean Seas for the first time with the strong support of the United States," he said.

"And now, as Mr. Secretary mentioned, we are working jointly on Southern Gas Corridor, and the project of energy security, energy diversification, and the long-term benefit to all the participants – producers, transit countries, consumers," said the president.

Ilham Aliyev noted that Azerbaijan is very grateful to the government of the US for its strong support in implementation of this project.

"Frankly speaking, without that support, it may have taken much more time and effort to implement the project. We are on track, we’ll be on time, and in two, three years, the Southern Gas Corridor will be in operation," he said.

"We are grateful to the U.S. Government for their efforts in finding ways to resolve long-lasting conflict between Armenia and Azerbaijan. We think that the conflict must be resolved based on United Nations Security Council resolution, which demand immediate and unconditional withdrawal of Armenian troops from our territories. The conflict between Armenia and Azerbaijan, all the conflicts in post-Soviet area and in the world, must be resolved based on territorial integrity of the countries," said Ilham Aliyev.

He further noted that Azerbaijan is close partners with the US on issues related to regional security.

"Azerbaijan provides its support, logistical support, in operations in Afghanistan, overflights, land transportation. Also we have almost 100 servicemen serving shoulder to shoulder with NATO servicemen in Afghanistan," he said. "So the agenda of our relations is very broad. Today, of course, we’ll cover these issues as well as regional problems, and I’m sure the meeting will play an important role in further development of our friendly ties."

Secretary of State John Kerry said the US was interested in developing strong and long-term cooperation with Azerbaijan. He said economic reforms, economic diversification were followed in the USA with interest.

Azerbaijan`s role in ensuring Europe`s energy security was underlined and the US support for Azerbaijan on this front was hailed at the meeting. The importance of the Southern Gas Corridor project was also stressed.

President Ilham Aliyev said Azerbaijan preserved main economic parameters despite the falling oil prices, adding that the country`s economy was in good condition. The head of state said vital measures were taken to strengthen the budget system in Azerbaijan amid the oil price fall.

They said there was mutual interest in US companies` more active presence and investment in Azerbaijan.

IIKSS- Azerbaijan`s Minister of Economy Shahin Mustafayev has met Chairman of Central Bank of the Islamic Republic of ...