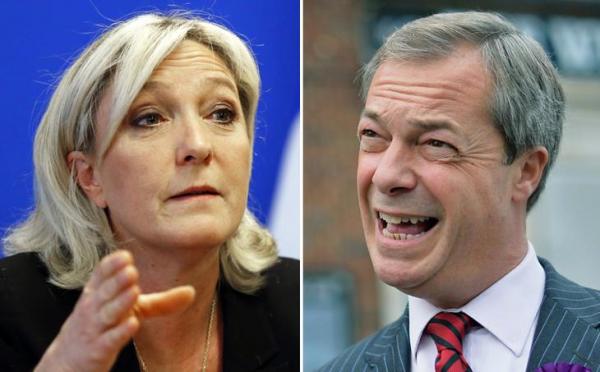 IIKSS- While U.S. intelligence agencies investigate claims that Russia secretly hacked emails to help tip last year's elections in favor of Donald Trump, Russia's push to bolster far-right populist politicians in Europe has been far more blatant.
Under President Vladimir Putin, Russia is working to empower Europe's far-right and Eurosceptic parties with offers of cooperation, loans, political cover and propaganda. Such love has not gone unrequited: European populists are answering back with fulsome praise for Russia, its foreign policy and its strongman leader.
The love affair comes as euroskeptic candidates prepare to face mainstream politicians in crucial elections looming on the horizon: Dutch elections next month, French elections in spring, German elections sometime in autumn and Italian elections at a still undetermined date.
From the Russian side, empowering anti-European Union populists has the obvious benefit of helping erode the strength of European institutions that Moscow has long considered enemies.
For Europe's extreme right, the benefits of embracing Putin are more abstract and ideological, said Markus Wagner, a political science professor at the University of Vienna. They see Putin as the kind of patriotic hero who prizes national traditions and realpolitik over the internationalism and openness that have long characterized Western liberalism.
It's a strongman self-stylization that many far-right politicians hope to imitate.
"There is a very clear stance from the Russian government that they are in support of populist radical right candidates," said Markus Wagner, a political science professor at the University of Vienna.
Like Putin, such parties tend to be "very anti-immigration, they're very tough on law and order and anti-terrorism and they have a certain sympathy toward Russian policies or the current Russian government," he said.
Examples of Russia's recent political efforts in Europe range from the subtle to the overt.
In just the past few weeks, Russian state media (and even its like-minded private media) have been using innuendo and rumor to openly demonize French presidential candidate Emmanuel Macron, whose centrist platform is now a direct threat to Kremlin favorite Marine Le Pen and her National Front Party.
In December, Russia's ruling party signed a five-year "cooperation agreement" with Austria's anti-immigrant Freedom Party, led by Norbert Hofer.
Moscow's entreaty to Austria comes only two years after a Russia-backed bank extended a nine million euro loan to Le Pen's National Front. Facing two competitive elections this year, Le Pen has considered going back to a Kremlin-backed bank to fill her party's $21 million shortfall.
Both Le Pen and Hofer have said their positions toward Moscow amount to politics as usual. Le Pen has denied that she was seeking additional money from Moscow and said the previous loan came with no policy strings attached.
Hofer said his cooperation deal with Putin's ruling party was actually a gesture toward peace.
"This is not about the ideological similarities. Instead, it's about finding peaceful cooperation," he said. "There is no [financial] support. It's really just about contacts. There have been claims that we would be financially supported from Russia. That's absolutely not the case."
But like Donald Trump, many European far-right leaders have publicly praised Putin, even as the Russian leader's ambitions in Eastern Europe threaten decades of European peace. Nigel Farage, one of Britain's loudest voices in favor of the UK's exit from the European Union, was among the first to praise Putin after the latter annexed Crimea from Ukraine.
Such praise plays well not only for European politicians but for Putin himself. They are frequently beamed to Russian television audiences in a show of Putin's global esteem.
The mutual affection has sparked anxiety among Europe's mainstream political class who worry about a repeat of the confusion that followed the American elections. German authorities spent months investigating potential Russian hacks and misinformation (they later ruled out direct Russian espionage).
The Netherlands' Ministry of Interior announced that it would scrap electronic balloting in favor of an onerous hand-count system to avoid "manipulation" of its March 15 vote.
"There are indications that Russians could be interested" in manipulating the vote, Dutch interior minister Ronald Plasterk wrote in a letter to parliament last week. "For the following elections we must fall back on good old pen and paper."
London's The Times reported Monday that the UK Foreign Office had been closely monitoring top politicians in the British National Party over Kremlin contacts. And the European Union launched its East Stratcom office nearly two years ago to counteract Russian "disinformation" about the EU in Eastern Europe.
Until the succession of European elections, it will be difficult to determine whether such moves get results - particularly since rightwing parties and Putin enjoy genuine affection among some European voters.
But for those who oppose the extreme right, Trump's election and its attendant Russian intrigue do not augur well.
Austria's Hofer now hopes to host the first meeting between Trump and Putin in Vienna.
"I think it would be a chance to lead these two countries closer together," Hofer said. "Austria would have been a great place."
It's a message of peaceful unity that many in Europe's establishment political circles find deeply suspicious.

Russia leaked use of Hamedan airbase without prior notice   Iran’s Defense Min. said Russians announced use of Iranian ...

Tehran, Feb 29, IRNA – Director General for Europe, America and Caspian Sea Neighbors in the Ministry of ...