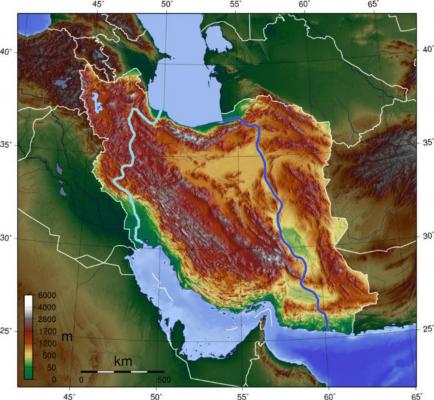 ran's ambitious project to build a 'trans-Iranian' canal from the Caspian Sea to the Persian Gulf will only be possible with Russia's help, says Bahram Amirahmadiyan, an expert on political geography at the University of Tehran.
Over the weekend, media reports recalled Iran's plans to construct an artificial trans-Iranian canal linking the Caspian Sea to the Persian Gulf. Negotiations on the project are said to be underway, with the canal itself expected to be commissioned in the 2020s.

The project, which faces many potential challenges that must be addressed before and during construction, was endorsed by former President Mahmoud Ahmadinejad several years ago, and in 2012, former energy minister Majid Namjoo calculated that the project would cost approximately $7 billion.

Asked to comment on the ambitious scheme, Bahram Amirahmadiyan, a member of the faculty of World Studies at the University of Tehran, told Sputnik that Iran will definitely look for Russia's assistance, and that of other countries in the region, to complete the project.

"We know by the example of other countries that building a canal to connect two major bodies of water is feasible. As an example, there is the Volga-Don Canal." Tehran, the academic added, has also taken an interest in the proposed Russian project to connect the Caspian and Black Seas, known as the Eurasia Canal project.

"For now, due to the reorientation of the geopolitical interests of some countries, this project has not moved beyond the planning stage," Amirahmadiyan noted.

The other project Iran is looking at is the above-mentioned plan to connect the Caspian Sea with the Persian Gulf or, alternatively, the Gulf of Oman.

"The history of this project dates back several decades, and it is rightly considered to be strategically important, since it would [exit into] international waters. Accordingly, the US military ships which currently operate in the Persian Gulf, and the ships of their allies, would run into certain difficulties in their freedom of movement. Therefore, considering current geopolitical realities, such a canal has strategic significance for Russian-Iranian relations."

Factually, Amirahmadiyan explained, "two variants for the route are being considered. The first is through an area between the city of Gorgan and the Mazandaran province [in the north], toward Sahrud, and from there to the country's central provinces and the Port of Chabahar (Iran's only port in the Gulf of Oman), and on into the Indian Ocean."

"The second option looks shorter on paper, and would connect the southwestern Caspian Sea to Abadan and Khorramshahr (on the border with Iraq) with the Persian Gulf."

"The second option looks more attractive from the financial standpoint, and discussion on the prospects for its implementation has long occupied the minds of Iranian authorities. However, there is still no consensus on the plan's feasibility."
Part of the discussion on the proposed Caspian Sea-Persian Gulf canal, the expert noted, includes focus on proposals to transfer water from the Caspian Sea to central Iran to help address the problems of water scarcity in agriculture. "However, such an effort may carry its own negative consequences, such as a disturbance of the ecological system, climate change and other issues."

So far in its history, Amirahmadiyan noted, the financial aspect has always been the main stumbling block when it comes to implementing the Caspian Sea-Persian Gulf canal project.

"For Iran and Russia, if they want to implement the project together, it will be necessary, in the current economic climate, to carefully weigh the costs and to make all the necessary calculations, because the construction costs would require enormous investment."

"Another important element is logistics. When the canal is built, it will be necessary to somehow establish transit links between the territories to its east and west, which will obviously require additional investment and capital expenditures. Another issue [which must be dealt with] is the difference in elevation between the Iranian regions which must be connected."

Finally, "in order for the canal to actually be navigable, it will require a great depth, and a width which is sufficient for the free movement of ships. And that is a big difficulty given the difference in elevation between the Caspian and Persian Gulf area regions. It will be necessary to equip the canal with locks."

In any case, Amirahmadiyan said, if implemented, such a project would be of tremendous strategic importance for Russia, providing, through Iran, a naval route to the Indian Ocean.
"In the early 2000s," the expert recalled, "countries signed on to the North-South Transport Corridor," a ship, rail and road route linking Russia to India via Iran. "But this project has [so far] remained on paper."

"Therefore, for such a large-scale project to be implemented, it will require a series of very careful and detailed studies, technical calculations, consideration of the economic risks, as well as ecological and even cultural evaluations. After all, our continent has never seen such a project of such magnitude before."

Ultimately, the academic noted, "for Iran, this project is very important. Iranians even call it 'Iran rud' ('Iran's River') –a big 'river' which would flow across the country, linking the south to the north."

​"If the project is implemented, we will become witness to important [economic] changes. First of all, Iran will get an unprecedented new national transport network, which will modernize, optimize, accelerate and simplify sea-based passenger travel and cargo shipping, most importantly the transport of energy resources – oil and gas."
"But the final word on the project falls to the specialists, to politicians and diplomats, who, through a comprehensive approach, can give the project new life. Of course, this will require the intensification of cooperation between the specialized agencies of Iran and Russia, including the joint Iranian-Russian Trade Commission."

Moreover, Amirahmadiyan noted, "the authorities of other Caspian countries too must not stay on the sidelines. States such as Kazakstan, Azerbaijan and Turkmenistan must also take part in the project. I think that if an economic union of Caspian countries were established, their joint efforts would benefit the implementation of a whole range of projects related to the Caspian Sea."