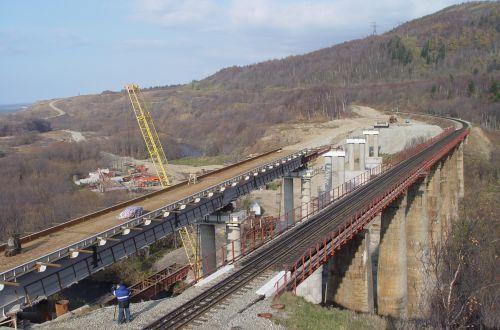 IIKSS- RUSSIAN Railways (RZD) announced on February 8 that it will allocate Roubles 1.9bn ($US 32.1m) towards an ongoing project to reconstruct the Trubnaya - Verkhniy Baskunchak - Aksaraiskaya line in southern Russia.
RZD says it is plans to commission 14km of the second track on the Lininsk - Zaplavnoe stretch this year, which will open after the Aksaraiskaya-2 locomotive station has been rebuilt. Construction of the bridge across the Akthuba River will continue, as will the extension of the lines at Volzhsky station.
The project is split into two stages. The first phase comprises the construction of the 126.3km second track on the Trubnaya - Akhtuba stretch, the extension of arrival-departure tracks of adjacent stations, and the construction of a bridge across the Akhtuba River. The second phase comprises the electrification of the Trubnaya - Aksaraiskaya section.
RZD has invested more than Roubles 6.6bn since the project began, and 67km has been put into operation so far.
The Trubnaya - Aksaraiskaya line is part of the North-South international transport corridor and provides transport connections between Siberia, the Urals, Caspian Sea ports, Kazakhstan, the Caucasian republics, and northwest and central Russia.

What's Behind Nagorno-Karabakh Row Between Armenia and Azerbaijan

On April 2, Armenia and Azerbaijan declared a dramatic escalation of the situation in the Nagorno-Karabakh region. Baku ...