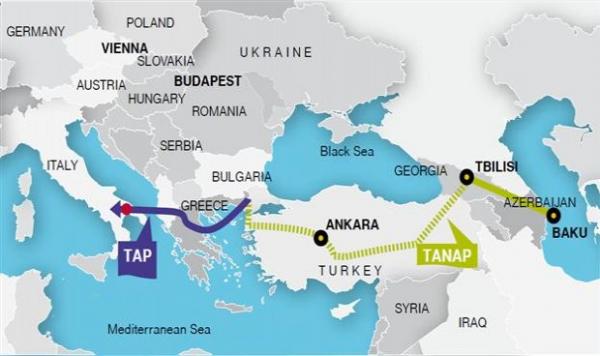 Azerbaijan’s Southern Gas Corridor project, aimed to bring gas from the Caspian Sea to Europe, will start operating in two-three years due to support from the US government, Azerbaijani President Ilham Aliyev stated on Wednesday in joint remarks with US Secretary of State John Kerry.

WASHINGTON (Sputnik) — The Azerbaijani Energy Ministry has previously stated that the Southern Gas Corridor is expected to be completed in 2019.

“We will be on time, and in two-three years the Southern Gas Corridor will be in operation,” Aliyev said. “We are very grateful to the government of the United States for a strong support in implementation of this project. Frankly speaking, without that support it may have taken much more time and efforts to implement the project.”

The pipeline represents a total investment of more than $45 billion and stretches over seven countries.

By Maksim Tsurkov – Trend: The US Agency for International Development (USAID) will provide expert assistance to the Coordinating Council on ...

Turkey, Turkmenistan and Azerbaijan aim to increase connectivity   Turkey needs to preserve the existing business volumes in established markets like ...

There are plans to sign many documents between Azerbaijan and Belarus, Deputy Head of the Foreign Policy Affairs Department ...