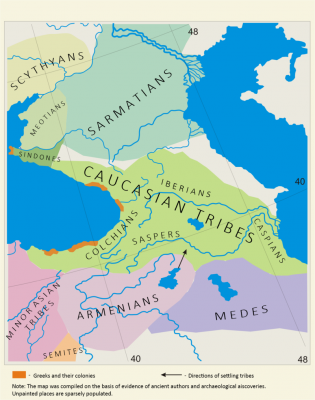 name of an ancient people dwelling along the southwestern shore of the Caspian Sea, whether north or south of the river Kura is not clear.

CASPIANS (Gk. Káspioi), name of an ancient people dwelling along the southwestern shore of the Caspian Sea, whether north or south of the river Kura is not clear. The name is not attested in Old Iranian (it may have been *Kāspiya- or the like); it survives perhaps in the name of Qazvīn ( < *Kaspēn “the Caspian”?), which lies at the junction of several roads leading into the region through the most easily negotiable pass across the Alborz mountains. The Caspian Sea (hē Kaspiā thálassa); the Caspian mountain(s) (tà Káspia órē, i.e. the Caucasus; Eratosthenes apud Strabo, 11.2.15); and the so-called Caspian Gates (hai Káspiai/Kaspiádes pýlai; q.v.) were all named after this people.

The Caspians have generally been regarded as a pre-Indo-European, that is, a pre-Iranian, people and have even been identified by some scholars with the Kassites (e.g., Herzfeld, loc. cit.). Onomastic evidence bearing on this point has now been discovered in Aramaic papyri from Egypt, in which several Caspians (Aram. kspy) are mentioned as belonging to the garrison there; their names, for example, *Bagazušta (see Grelot, pp. 101ff.), are, at least in part, unequivocally Iranian. The Caspians must therefore be considered either an Iranian people or strongly under Iranian cultural influence.

Herodotus, Strabo, and other classical authors repeatedly mention the Caspians but do not seem to know much about them; they are grouped with other inhabitants of the southern shore of the Caspian Sea, like the Amardi, Anariacae, Cadusii, Albani, and Vitii (Eratosthenes apud Strabo, 11.8.8), and their land (Kaspianḗ) is said to be part of Albania (Theophanes Mytilenaeus apud Strabo, 11.4.5). Whether or not they belonged to the Median empire is not clear. According to Herodotus (3.92.2), they, together with the Pausicae, Pantimathi, and Daritae, were included in the eleventh nomós of the Achaemenid empire under Darius I. This region later was attached to Media Atropatene and Albania in turn.

Herodotus (3.93.2) mentions another people with the same name, who, together with the Sacae (Sákai) inhabited the fifteenth nomós; these Káspioi, who were among the participants in Xerxes’ army (Herodotus, 7.67.1; 86.1[.2]), are sometimes considered to have been located in the Pamirs or in what is now Kashmir and were perhaps the forerunners of the present-day Nuristanis (for another possible location, see Cook, p. 196). There are, however, serious doubts about the correctness of Herodotus’ text; among the emendations proposed are *Kápisoi and Kaspeîroi.

Iran to host 1st World Conference of Mayors and Councilors

The Iranian capital Tehran is going to host the 1st World Conference of Mayors and Councilors from July 20 ...

Russia holds reconnaisance flights over Caspian Sea   Russian advanced bombers and jet fighters have been relocated to western part of ...