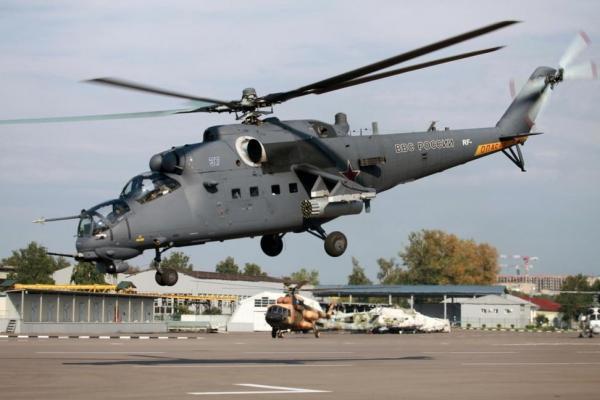 IIKSS - Russia's state-owned Rostec subsidiary Russian Helicopters plans to supply Kazakhstan with four Mi-35M combat helicopters in 2018.
According to the company, the sale is part of a military modernization effort for both countries, and strengthens strategic cooperation between their respective armed forces. The new rotorcraft will be used to replace Kazakhstan's aging fleet of Mi-24 helicopters.
"Unlike its predecessor, the Mi-35M has significantly expanded possibilities of use, since it can perform combat missions at any time and under any weather conditions," Russian Helicopters deputy sales CEO Vladislav Savelyev said in a press release. "It has increased rate of survival in the air due to its advanced security features. Its performance characteristics are also improved."
Kazakhstan is one of the most prominent customers of Russian-made rotorcraft, fronting a fleet of 200 units manufactured in the country.
The Mi-35M attack helicopter is a follow-up to the Mi-24V, and carries guided and unguided weapons. It is also equipped with updated navigation and avionics technologies with multi-function colored displays, VK-2500 turboshaft engines, and a new swashplate X-type tail rotor.
In addition to combat, the aircraft is also fitted for military transport missions. The Mi-35M can land up to eight paratroopers at a time with supporting equipment.
Source: UPI

Replacement of pipes at Kazak Kashagan field on schedule