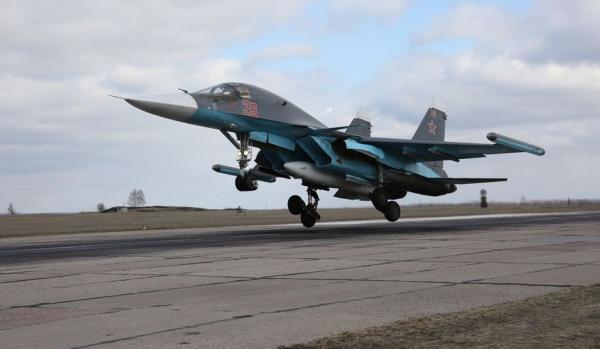 Russian armament manufactures experienced a marketing bonanza in Vladimir Putin’s Syrian expedition. TASS, the Russian state news agency says negotiations are now going on with countries in Africa, Asia, the Middle East, and Latin America. The SU-34 bomber seems to be the biggest hit, having proved itself in a combat theater and helping to defeat the Islamic State in places like Palmyra.

“No doubt, the interest has increased and I want to say that dozens of Rosoboronexport delegations are on foreign trips weekly and a very intensive process of negotiations is under way with countries from the Middle East, Africa, Latin America, Asia and so forth,” Deputy CEO of Russia’s state arms exporter Rosoboronexport Sergey Goreslavsky said at the Defexpo India-2016 arms show. “Following the results of this operation [in Syria], the interest in Su-34 bombers has increased. Several countries are showing the most substantive interest in this machine. They are from the Middle East but I won’t name them.”

The “marketing effect” from the Syrian campaign could lead to contracts worth $6bn-$7bn, quoting sources in the Russian government, military and arms export structures. Algeria, Indonesia, Vietnam and even Pakistan, which has long purchased military aircraft from China and the US, intend to buy Sukhoi fighter and bomber jets, reported the Guardian.

“Ruslan Pukhov, director of the Centre for Analysis of Strategies and Technologies, said the Syrian operation had affected Russian arms sales “extremely positively” by showing Moscow has effective weapons and can challenge western influence. “Russia basically proved it has political will, it has balls, because normally people don’t buy weapons from losers,” he said.”

In addition, the Russian military launched Kalibr cruise missiles from the Caspian Sea and the Mediterranean, deployed the S-400 anti-aircraft missile system to counter NATO, and deployed the Mi-28N Night Hunter attack helicopter. All of these systems are seeing inquiries from interested parties.

Russia doesn’t export a lot of things but it does make very good weapons. Highlighting this Russian capability obviously was a goal of the Kremlin to boost Russian economic growth and cash flow in foreign currency.