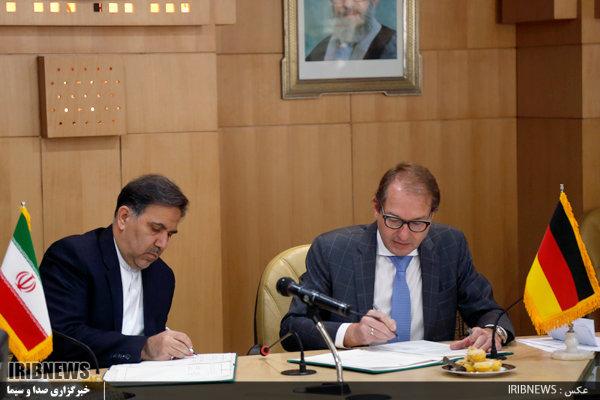 IIKSS - Iran, Germany ink transportation dealsThe agreements were signed by Iranian Minister of Road and Urban Development Abbas Akhoundi and German Minister of Transportation Alexander Dobrindt here in Tehran.
They also agreed to form a work group to pursue implementing the agreements.
"Germany has always been Iran’s great trade partner in Europe and the two countries have historical industrial ties,” Akhoundi said in a press conference with Dobrindt after signing the deals.
He said that Iran’s energy and infrastructure conglomerate MAPNA and German Siemens are going to sign a deal next week on purchase of 700 electric locomotives.
Akhoundi continued that Iran introduced Tabriz, Ahwaz and Chabahar airports for investment during Dobrindt’s visit to Iran, and the German side expressed its willingness for investment in the projects.
Dobrindt, for his part, said, "We are keen to transfer experiences on aerial and marine fields as well as railroad to Iran.”
The working group is to start examining ways and means of cooperation in the airport, railway, maritime and road sectors on Tuesday.
The German minister is heading a delegation, comprising 30 senior directors of German companies.
Source: YJC

Donald Trump has warned Bashar al-Assad and the Syrian president’s allies Iran and Russia not to “recklessly attack” in ...