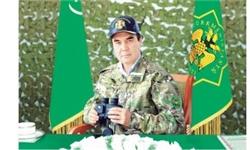 IIKSS - President Gurbanguly Berdimuhamedov arrived to marine border guard post Hazar. Having received reprt form the commander of the post, President of Turkmenistan, Supre Commander of the Armed Forces Army General Gurbanguly Berdimuhamedov went to Coast Guard and patrol ship “Arkadag”.
The captain reported on the readiness of the ship to sail. The Head of the State embarked the ship and the Presidential colours was hoisted.
The Head of the State went by Arkadag to Turkmenistan Gayratly Navy ship, which serves its duties for protection of sea borders. The captain of the ship reported to President of Turkmenistan Supreme Commander of the Armed Forces Army General Gurbanguly Berdimuhamedov on the quiet situation in the territorial waters, overall control for protection of border zone, peace and security on marine spaces of the country.
On-board Gayratly, the Head of the State expressed the interest with provision of the ship, advanced navigation and radio equipment, asked about the designation of different equipment and apparatus as well as familiarized himself with the conditions for the crew.
During the meeting, which was held in warm environment, the marines asked the questions to the Head of the State, having answered the questions, the President of Turkmenistan also expressed the interest in their proposals and wishes.
Having wished strong health, good spirit and successes in their service to all Turkmen military personnel, the Head of Turkmenistan left the entry in the Book of honoured guests of Gayratly ship.
Entering the deck, President Gurbanguly Berdimuhamedov familiarized tactical and technical characteristics and combat ability of the warship.
Having said goodbye to the marines, the Head of the State transferred to Arkadag where he also left the entry in the Book of Honoured Guests and left for shore.
At the same day, having completed working visit to Balkan Velayat, the President of Turkmenistan arrived to Turkmenbashy International Airport from where he flew out to Ashgabat.
Source: State News Agency of Turkmenistan

The Central Asia Salt Basin of Turkmenistan, Uzbekistan, Tajikistan and Afghanistan has the potential to contain between 39 and 54 ...