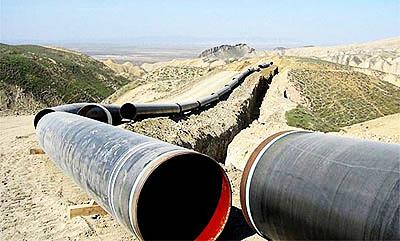 President Hassan Rouhani said Iran has laid the pipeline up to the border to export gas to neighboring Pakistan encouraging the government in Islamabad to speed up measures to complete its share on its soil, Shana reported.

Speaking at a press conference to wind up his two-day visit to Pakistan on Saturday, he stressed that Iran is determined to increase its relations with Pakistan in energy, ports, customs, roads, railways, cultural, academic, and scientific areas.

“Expansion of Tehran-Islamabad ties will serve the interests of the Iranian and Pakistani nations, regional and the world,” he added.

President Rouhani also said Iranian port of Chabahar and Pakistani port of Gwadar are complementary and in a sound competition can be gateways of the land-locked Central Asian countries to the Indian Ocean.

“We are following up launching a West-East corridor between the two ports. Further road, railways, and shipping links can help establish the corridor and connect China to this region,” he said.