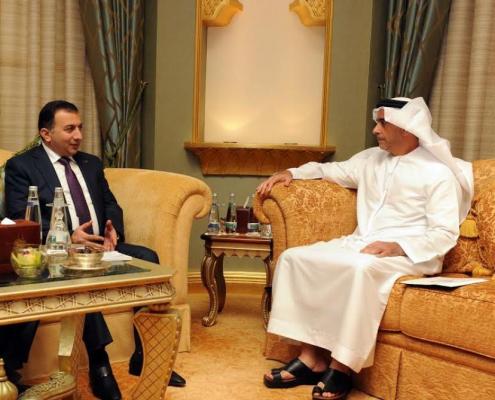 IIKSS - Azerbaijan and the United Arab Emirates discussed perspectives of the development of the bilateral relations, as Baku’s Ambassador to the UAE Dashgin Shikarov met the country`s deputy Prime Minister, Interior Minister Saif bin Zayed Al Nahyan, who praised political relations between the two countries.
The diplomat also noted that the reciprocal visits gave a push to further development of ties between the two countries.
Shikarov highlighted the socio-political developments after the country gained its state independence.
The ambassador provided an insight into the cause and consequences of the Armenia-Azerbaijan, Nagorno-Karabakh conflict and the sides exchanged views on the current state of the conflict.
In turn, Saif bin Zayed Al Nahyan stressed the role of the reciprocal visits in development of bilateral cooperation.
The Deputy Premier also invited the Azerbaijani sides to participate in the international defense exhibition “ADEX 2017” to be held in Abu-Dhabi.
Azerbaijan and UAE enjoy fruitful cooperation in various fields and their mutual relations are developing both in the political, economic and cultural fields with ascending line. The diplomatic relations between the two countries were established in 1992. The trade turnover between the UAE and Azerbaijan in January-August amounted to $55.66 million, and this is 35.4 percent more than during the eight months of 2015, according to the Azerbaijani State Customs Committee.
Recently, the two countries agreed to establish a joint investment fund to facilitate the implementation of joint investment in mutually beneficial projects. It is important to carry out investments in the areas that stimulate the growth of mutual investments and increase trade, particularly in agriculture, food processing, logistics and transport systems.
Starting November 10, 2015, citizens of the UAE has visited Azerbaijan on a simplified procedure. They can obtain entry visa, valid for 30 days’ stay, at any international airport in Azerbaijan. Now, Azerbaijan is holding negotiations to introduce a visa-free regime for citizens of both the UAE and Azerbaijan.
Source: AzerNewsAz