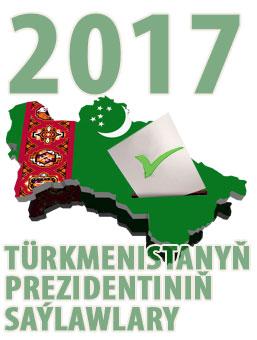 IIKSS - The number of presidential candidates in Turkmenistan at the election scheduled for February 12, 2017, has reached nine, the country's Central Election Commission said in a message Dec. 27.
Deputy Head of the Mary region of Turkmenistan Jumanazar Annayev; Director of Seydi oil refinery, MP Ramazan Durdyyev; Deputy Head of Dashoguz district Meretdurdy Gurbanov; Head of the Economic Department of Akhal province Serdar Jelilov; Director General of ‘Garabogazsulfat’ association Suleymannepes Nurnepesov and Deputy Chairman of state association of food industry Maksat Annanepesov are among the candidates nominated by initiative groups of Turkmen citizens.
The Democratic Party nominated the incumbent head of state Gurbanguly Berdimuhamedov, the Union of Industrialists and Entrepreneurs of Turkmenistan nominated chairman of the Commercial Bank Rysgal, Bekmyrat Atalyev, and the Agrarian Party nominated Durdygylych Orazov.
“All the candidates are given equal rights and opportunities to submit their proposals,” the message said. “This will allow the electorate to assess each candidate’s election program.”
Both national observers and specially invited representatives of various international organizations will be monitoring the electoral process in Turkmenistan.
Gurbanguly Berdimuhamedov has been elected twice as the country’s president. During the presidential election in 2012, 97.4 percent of voters cast their ballots for Berdimuhamedov.
Turkmen president is elected for a period of seven years, according to new amendments to the country’s Constitution.
Source: TREND