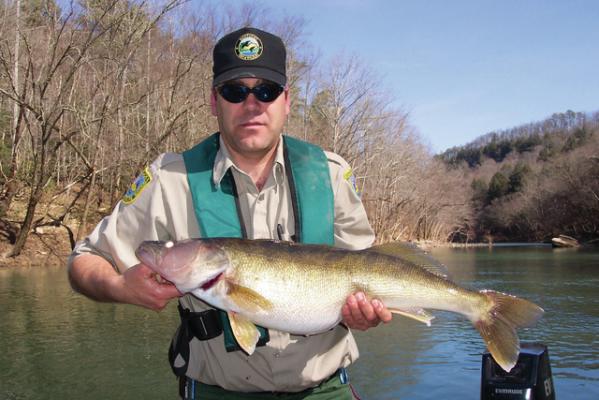 FRANKFORT — It is no longer getting dark at dinner time. We are beginning to have days cresting the 50 degree mark. It is enough to make you want to go fishing.

Before you cast a line, however, you need to know about the new fishing regulations that go into effect March 1.

The round goby is an aggressive, non-native fish released accidentally into the St. Clair River from ballast water transfers among cargo ships in the early 1990s. Native to the Black Sea and Caspian Sea regions in Eurasia, the invasive baitfish is now found throughout the Great Lakes system and in the Illinois River. The round goby can negatively impact the reproduction of native fish such as the smallmouth bass.

These fish may not be possessed or released in Kentucky.

Kentucky is restoring the native, river-run walleye to its former range through stocking efforts. To protect these fish, an 18- to 26-inch protective slot limit and a two fish daily creel limit will go into effect on several river systems throughout Kentucky. All walleye caught from 18 to 26 inches in length from these waters must be immediately released.

“We are trying to give greater protection to the breeding-sized native walleye in the population,” said Dave Dreves, assistant director of fisheries for the Kentucky Department of Fish and Wildlife Resources. “These walleye are

about 5 years old before they are sexually mature. We’ve found a 5-year-old walleye is a little over 20 inches long.”

These walleye previously fell under the statewide regulations of a six fish daily creel limit with a 15-inch minimum size limit.

Dewey Lake, a 1,100-acre impoundment in Floyd County, began receiving stockings of muskellunge in 2014. To protect these stocked fish and create a trophy muskellunge fishery, there will be a 36-inch minimum size on muskie in the lake.

The flathead catfish harvest restrictions are now removed on 175-acre A.J. Jolly Lake in Campbell County. The prohibition on the possession of shad on 784-acre Cedar Creek Lake in Lincoln County is also removed starting March 1.

The first day of March is not only the start date of these new fishing regulations; it is the beginning of the new license year. Anyone fishing in Kentucky after this date must have a new fishing license.

The $20 annual resident Kentucky fishing license pays for many benefits enjoyed by anglers, such as the more than 5.5 million fish stocked annually in waters across the state produced by the Minor Clark Fish Hatchery near Morehead and Pfeiffer Fish Hatchery near Frankfort.

These stockings fill the popular Fishing in Neighborhoods (FINs) lakes with bluegill, catfish and trout.

“Several of our popular fisheries such as hybrid striped bass, walleye and striped bass wouldn’t exist without stocking,” Ross said. Stockings also provide for new fishing opportunities such as the recent stockings of muskellunge in Dewey Lake.

These funds help biodiversity. The restoration of the native walleye into the previously mentioned river systems is an example as well as the recent restorations of lake sturgeon and alligator gar.

You may purchase your Kentucky fishing license in person at tackle stores, in the sporting goods section of major department stores and at county clerk offices across Kentucky. You may also buy a fishing license 24 hours a day by calling 877-598-2401 or online at the Kentucky Fish and Wildlife website at fw.ky.gov.

Author Lee McClellan is a nationally award-winning associate editor for Kentucky Afield magazine, the official publication of the Kentucky Department of Fish and Wildlife Resources. He is a lifelong hunter and angler, with a passion for smallmouth bass fishing.