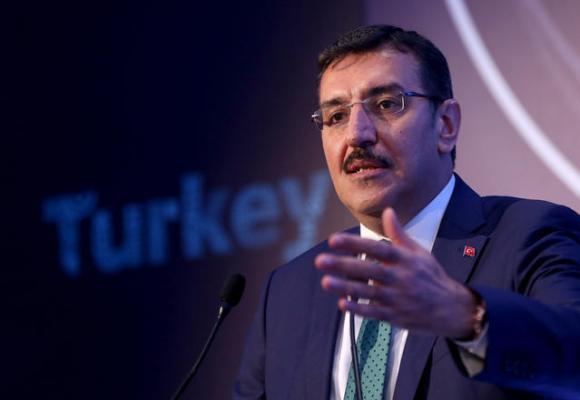 IIKSS - Turkey’s Customs and Trade Minister Bulent Tufenkci has voiced his country’s intention to simplify customs procedures with Azerbaijan, and establish a “green corridor”, similar to the one existing between Russia and Turkey.
“Turkey’s Ministry of Customs and Trade wants to simplify and speed up customs procedures to ensure the access of Turkish goods to new markets with a view to strengthen the competitiveness of the country. Turkey joined the WTO Trade Facilitation Agreement, which expands the opportunities for our businessmen,” he told Trend.
Green Corridor mode, which implies simpler customs clearance, may provide smooth transit of goods. One of the advantages of the regime is that goods transported by entrepreneurs do not have to undergo customs inspection and examination when crossing the border. Moreover, the mechanism also applies to documents, minimizing certain bureaucratic issues.
Saying that the mutual trade between Turkey and Azerbaijan has been growing steadily over 15 years, the minister said that the current level of trade turnover is far below the real potential of the economic ties of the countries.
He added that the countries plan to bring the volume of trade turnover to the level of $15 billion in the coming years.
Turkey, which has always held leading positions among the foreign trade partners of Azerbaijan, ranks the second in Azerbaijani imports and the 14th – in the exports. Azerbaijan mainly imports various equipment, electrical appliances, household items, cars, while Turkey imports oil and oil products and gas.
Mentioning that Azerbaijan is focusing on diversification of its economy going towards the non-oil sphere, he said that Ankara wants to see such investments of Azerbaijan in Turkey.
Tufenkci also underlined that Azerbaijan is the leader for the volume of investments in the Turkish economy among the countries of Central Asia and Caucasus.
The two countries signed a protocol on the creation of the Joint Committee on Customs Issues in 2015 during the visit of a Turkish delegation to Baku.
The economic projects jointly implemented by Azerbaijan and Turkey, particularly in the energy sector, have made a significant contribution to the development of the strategic partnership between the two countries.
The partnership between the countries has turned into a driving force forming policy and economy of the region. Azerbaijan's investments in the Turkish economy are expected to reach some $20 billion by 2020, while the current figure exceeds $6 billion.
Trade turnover between the countries amounted to $1.67 billion in January-September 2016, according to the State Customs Committee of Azerbaijan.
Source: AzerNewsAz

IIKSS-The International Ocean Institute (IOI) with the support of Turkmenistan’s Foreign Ministry and the State Enterprise on Caspian ...

Inland water bodies now see coastal birds   The Whimbrel, which usually migrates to the coast, was spotted at Saykheda in ...