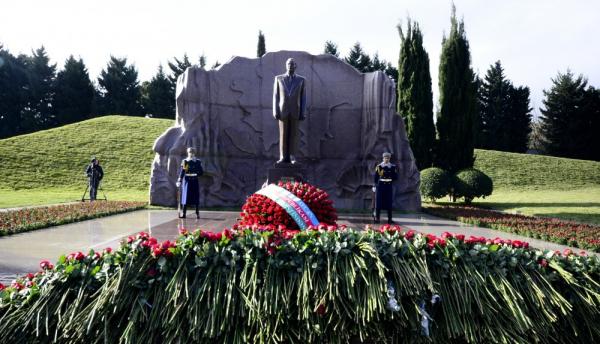 IIKSS - 13 years have passed since Azerbaijan's national leader Heydar Aliyev died.
Heydar Aliyev is a personality who created history. Today the Azerbaijani people commemorate the Great Leader and numerous events are organized in all regions of Azerbaijan, as well as in the capital Baku.
On that day, representatives of government agencies, political parties, nongovernmental organizations, media outlets, as well as the people of Azerbaijan visit Heydar Aliyev’s grave in the Alley of Honors.
Heydar Aliyev was the very leader who created the modern history of Azerbaijan, becoming a true legend of his time. The history remembers him as a unique leader, a powerful head of state, a selfless man, and a legendary figure able to take on his shoulders a difficult historical task of state building.
His invaluable achievements enabled the young state to stand on feet and to enter into the 21st century as an independent country.
Heydar Aliyev’s philosophy of Azerbaijanism, after gaining independence, determined the place of Azerbaijan in the modern world, provided a strong basis for the solidarity of the world Azerbaijanis as an ideological ground to the national statehood.
The people of Azerbaijan is proud of their great son, who devoted all his life to faithfully serving the people and motherland in the most difficult period of history. The bright memory of Heydar Aliyev, the national leader of the Azerbaijani people, wise leader and genius personality lives in the hearts of millions and enlightens the future of Azerbaijan.
Source: AZERTAC