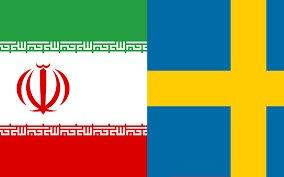 IIKSS - Sweden’s State Secretary Hans Dahlgren, at a meeting with Iran’s Presidential Chief of Staff Mohammad Nahavandian, said Stockholm had political determination to expand multilateral ties with Tehran.
During the joint meeting in the Swedish capital, Iran’s Nahavandian expounded on proper economic grounds in the post-JCPOA era saying “emergence of the positive atmosphere along with Iran’s strategic position inside the region is promising of stable and growing prospects for investment and economic cooperation.”
He underlined that the Iranian government sought to launch facile and quick relations between various foreign firms and Iran’s private sector especially in fields related to oil, energy, environment, railroad transport among the others.
Nahavandian said Iran planned to pave the path for practical partnership of the youth in the private sector by exploiting modern scientific methods in order to bring about prosperity in a wide variety of arenas.
Hans Dahlgren, State Secretary for International and EU Affairs to Sweden’s Prime Minister Stefan Löfven, welcomed reinvigoration of economic and political ties with Tehran deeming the Islamic Republic of Iran as a country with significant characteristics at both regional and international levels.
The official also emphasized the European country’s determination to boost and elevate bilateral relations with Iran; “Sweden has always enjoyed positive extensive relations with Iran though existing ties could be strengthened.”
Dahlgren went on to add that Stockholm was ready to reach agreements on bolstering of ties in transport, environment and ICT (information and communications technology) fields.
He expressed eagerness to expedite and facilitate development of cooperation between major Swedish firms and Iran’s private sector, an aim which requires coordination between economic sectors of both sides; “bilateral talks and negotiations between the two countries’ officials are a top priority for taking practical measures in this regard,” he commented.
Iran’s Presidential Chief of Staff Nahavandian arrived in the Swedish capital on Thursday evening for meetings with top-ranking economic officials of the country.
Source: Mehr NEWS AGENCY