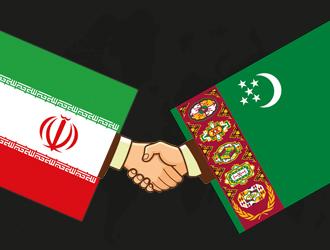 IIKSS - Iran and Turkmenistan intend to boost their ties and level of cooperation in various fields of economy, including energy, transport, and trade.
Turkmen Foreign Minister Rashid Meredov held talks with Deputy Foreign Minister of Iran Ebrahim Rahimpur, said the message of Turkmen Foreign Ministry.
The parties noted the significant potential for deepening and diversifying mutual trade turnover.
It was accumulated experience and mutually beneficial exchanges in all areas of cooperation, including between the public and business circles of the two countries, according to the message.
The two countries border on the Caspian Sea and share a common border of more than 1,000 km.
Iran and Turkmenistan, the two Caspian littoral states enjoy a considerable potential to expand effective bilateral partnership in various fields.
Iran is the third largest partner of Turkmenistan in foreign trade primarily due to natural gas purchases.
In turn, Turkmenistan imports from Iran raw materials, building materials, steel products and inorganic chemicals, plastic products, rubber, detergents, food and other consumer goods.
Turkmenistan is the largest supplier of natural gas to the Islamic Republic. Turkmenistan also plans to increase its electricity imports to Iran.
The joint project Iran-Turkmenistan-Kazakhstan railway – which was designed to serve to the intensification of trade and economic ties in the Eurasian space, also plays a significant role in the bilateral relations between the two countries
The railway route Uzen-Gyzylgaya-Bereket-Etrek-Gorgan was commissioned in December 2014. This railway is designed to facilitate the optimization of cargo traffic throughout the Eurasia continent.
The total volume of trade turnover between Turkmenistan and Iran has exceeded $2.62 billion in 2015, according to the official statistics.
Iran and Turkmenistan have agreed in February to increase the value of bilateral trade to $60 billion over the next decade.
Source: Trend

Shifting Conflict and Security Dynamics in the Caucasus: The Role of Regional Powers

Shifting Conflict and Security Dynamics in the Caucasus: The Role of Regional Powers By Neil J Melvin, Ekaterina Klimenko for ...