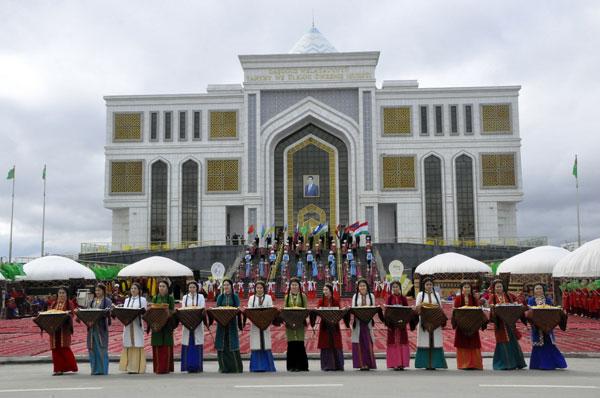 IIKSS - Within a year, the ancient Turkmen land has hosted artistic forums, exhibitions of fine, decorative and applied arts, theatre performances, film festivals and concerts of masters of arts from the CIS states.
The events taken place in Dashoguz this year contributed to the popularization of the historical and cultural heritage of the Turkmen people, spiritual enrichment and promotion of humanistic values in the post-Soviet region. Workers of culture and arts of the CIS states got acquainted with the Kunya Urgench historical monuments included into the UNESCO World Heritage List. Dashoguz was the venue for the international scientific conference dedicated to the historical and cultural heritage, the scientific forum on the significance of the Gerogly Epic and its place in the world culture.
The solemn ceremony of closing the programme of cultural events will take place in Dashoguz on December 7.
Before the festivities in Dashoguz, the CIS delegations will get acquainted with the sights of white-marble Ashgabat, visit the State Museum of the State Cultural Centre, the National Turkmen Carpet Museum, the Old Nisa Historical and Cultural Reserve.
Then the guests will leave the Turkmen capital for the administrative centre of the northern region of the country, where they will visit the historical and cultural sights in Dashoguz, the Dashoguz Velayat Library and the Local History Museum, the funds of which contains more than 8,000 exhibits – the monuments of history, arts and culture of the Turkmen people.
A film telling about how Dashoguz as the cultural capital of the CIS states hosted the cultural events, will be demonstrated during the closing ceremony.
The culmination of the celebrations will be a big joint concert of masters of arts of CIS member states, which will take place in the Ruhiyet Palace in Dashoguz on December 7.
Source: State News Agency of Turkmenistan

Russia has reportedly rejected an Israeli demand to keep Iranian military advisors away from the occupied Golan Heights. ...