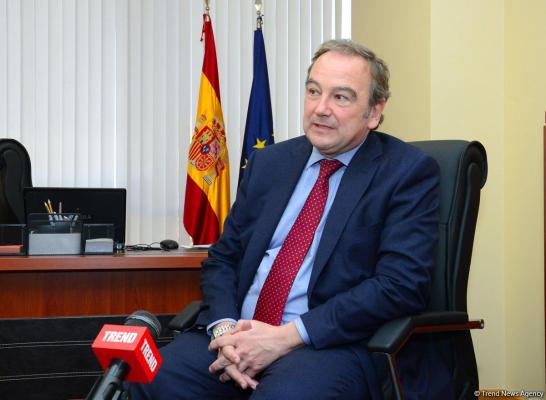 IIKSS - Creation of a new government in Spain will give an impetus for bilateral cooperation with Azerbaijan, Jose Luis Diez Juarez, Charge d'Affaires of Spain to Azerbaijan believes.
"We had an acting government for a year. Our parliament managed to form a government just a couple of weeks ago and now we have to prepare all the agendas," Diez told Trend in an interview.
He noted that no official visits have been confirmed yet between the countries for the next year.
Diez reminded that Azerbaijan and Spain held political consultations last year, adding that a memorandum of understanding is being negotiated now in order to make those political consultations more regular – every year or every two years.
Charge d'affaires noted that the two countries have a lot of cooperation and support each other within international organizations.
He also stressed that Spain strongly supports territorial integrity and sovereign independence of Azerbaijan.
Moreover Diez said that Azerbaijan and Spain develop cooperation in educational and cultural spheres. He noted that some Azerbaijani students have already got scholarships from Spanish government adding that Azerbaijani government also gives scholarships to students to go to Spain.
"We always have a few students in Spain coming from Azerbaijan," Spanish diplomat said.
He noted that there are a regular cooperation between Azerbaijani and Spanish universities, for example between the University of Architecture and the University of architecture in Alicante, University of Languages and the University of Murcia, and one of biggest Spanish institutes – Instituto de Empresa (IE) is cooperating with Azerbaijan too.
"We also have Erasmus exchange. So the exchange of the students and professors of our universities is quite developed," Diez said.
He went on to say that from time to time Spanish students participate in some programs in the energy or Caspian studies spheres in Azerbaijani Universities.
Diez also said that in the last two years Spanish Embassy had organized a lot of cultural events in Azerbaijan.
"We found sponsors to support several concerts of Spanish music here - flamenco, classical guitar. We did a film festival in May, a night of Spanish literature and music in October. We participated in the Jazz festival and it was very successful. And we are planning already more projects for the next year," Spanish diplomat said.
In particular it is planned to participate in the Jazz festival next year, do at least one more flamenco concert and try also to have a Spanish film festival next year, he said.
Source: Trend