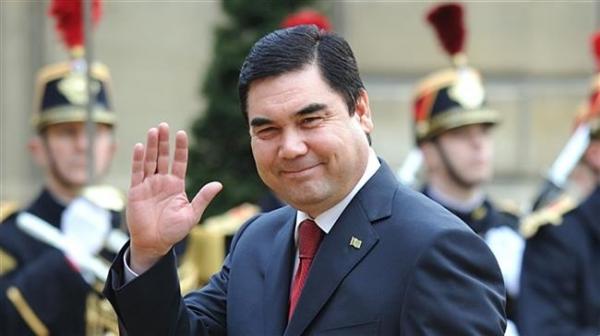 IIKSS - The son of Turkmen President Kurbanguly Berdymukhamedov has become a parliamentary deputy, state television in the isolated Central Asian nation reported on Wednesday, a possible sign that he is being groomed to eventually succeed his father.
Berdymukhamedov, 59, who has run the gas-rich former Soviet republic since 2006, wields sweeping powers and is the center of an elaborate personality cult. He is widely expected to secure a third term of office in the February 2017 election.
Serdar Berdymukhamedov, the president's only son who has previously kept a low public profile, became a member of parliament after winning a by-election, state television said.
Turkmenistan, a largely desert nation bordering the Caspian Sea, amended its constitution in September in a way that would allow Berdymukhamedov to stay in power indefinitely.
In this, he would be following in the footsteps of his predecessor Saparmurat Niyazov, who ruled Turkmenistan first as communist-era boss and then - after independence from Moscow in 1991 - as president until his death in 2006.
Niyazov bore the title of Turkmenbashi, or leader of the Turkmens, and his time in power is officially designated the "Golden Age".
Berdymukhamedov is commonly referred to as Arkadag, or protector, who in official parlance is overseeing an "era of might and happiness".
In Kazakhstan, another ex-Soviet Central Asian nation, President Nursultan Nazarbayev's daughter is a deputy of the upper house of parliament, while a son of Tajikistan's leader, Imomali Rakhmon, runs the country's anti-corruption agency and football association and is also viewed as a possible successor.
Source: Reuters

On the horns of a dilemma: Water transfer from Caspian Sea to central Iran

Water transfer from the Caspian Sea in northern Iran to the central province of Semnan ...

The Political Consequences Of Iran And Azerbaijan’s Energy Agreements

On February 23, Azerbaijani President Ilham Aliyev visited Tehran, where he met with his Iranian counterpart, Hassan Rouhani. Notably, the ...