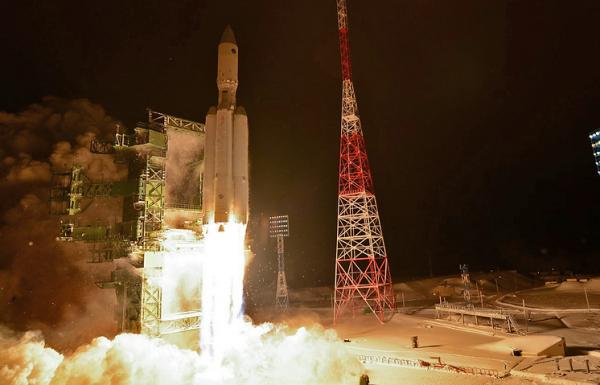 IIKSS - The project for creating Russia’s super-heavy space rocket and launch pad for it will cost approximately 1.5 trillion rubles (roughly $23 billion at the current official rate of exchange), the first deputy CEO of the state-run corporation Roscosmos, Aleksandr Ivanov, said on Tuesday.
"The costs of creating a super-heavy rocket in combination with the launch pad are estimated at 1.5 trillion rubles," Ivanov told the research conference Cosmonautics in the 21st Century. "We are not going to make a super-heavy rocket right away, though, because nobody needs it for the time being. We’ve opted for a step-by-step solution. First we’ll make a medium class rocket - called Feniks (Phoenix).
Feniks has been conceived as the first stage of a super-heavy rocket. The Angara rocket’s hydrogen-fueled stage will be used as the third stage. No decision regarding the second stage has been made yet, Ivanov said.
The project for making a super-heavy space rocket was originally approved in the autumn of 2014. In the spring of 2015 Roscosmos chief Igor Komarov said, though, that work on a new space rocket would have to be postponed. The project is absent from the Federal Space Program for 2016-2025, which was adopted last spring.
The Feniks rocket is expected to be delivered by 2025.
It will be capable of putting up to 17 tonnes of payload into low orbits around the Earth (manned space projects included), and 2.5 tonne payloads into geostationary orbits (for which it will be equipped with special boosters).
Source: TASS