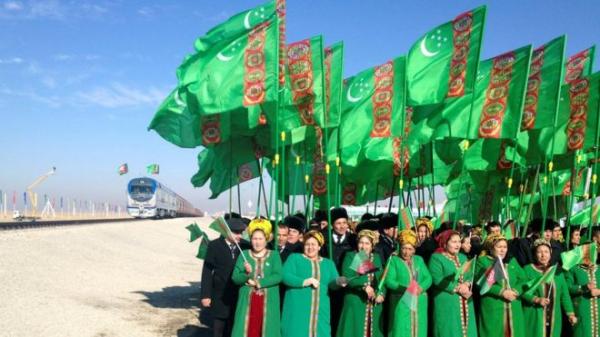 IIKSS - Speaking during the opening ceremony of Atamurat-Ymamnazar-Akina railway - the first link of the Asian transnational transport corridor, President of Turkmenistan Gurbanguly Berdimuhamedov and President of the Islamic Republic of Afghanistan Mojhammad Ashraf Ghani underlined the importance of this project for the region.

Underlining that the project on construction of the first stage of the Asian transnational railway project was launched on June 5, 2013 with the participation of the Presidents of fraternal countries – the Republics of Tajikistan and the Islamic Republic of Afghanistan, President Gurbanguly Berdimuhamedov noted that within the last period, Turkmen builders did significant, large-scale work. Two railway bridges were built over the 88-kilometre Atamurat-Ymamnazar (Turkmenistan)-Akina (Afghanistan) section. Moreover, the Gulistan and Ymamnazar rail stations, new rail stations and auxiliary infrastructure facilities were built.

The road, which is designed to increase the transport and transit potential of the country, will be an important international corridor to Europe, Asia - Pacific and South Asia and will contribute to strengthening the economic and trade cooperation, serving the interests of millions of people. “Establishment of a developed transport and transit infrastructure is our top priority”, said the President of Turkmenistan, noting that new railway and road bridges across the Amu Darya - another large engineering project in the region, will be put into operation within the next days.

President of the Islamic Republic of Afghanistan Mojhammad Ashraf Ghani emphasized the importance of the new railroad for the interstate cooperation. According to the leader of the neighbouring state, the people of Afghanistan highly evaluates the partnership with Turkmenistan, supporting its international initiatives aimed at guaranteeing sustainable development all around the world.
Source: State News Agency of Turkmenistan

Tapping into Iranian Market Daewoo E&C Signs US$11.5 Billion Worth of MOUs

Daewoo Engineering & Construction Co. ., a major South Korean builder, announced on May 4 that it had meetings with ...

Kazakhstan’s Caspian Coastline Offers Various Vacation Options   The Caspian Sea may not be filled with beach resorts or be ...