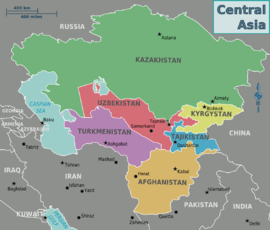 IIKSS - The long-awaited U.S. presidential election has come to an end, with Donald Trump successfully pulling off an upset win. While the United States remains the most influential country on Earth, the results from November 8, 2016 will definitely bring some changes to the international constellation, including Central Asia.
Since their catapult to independence thanks to the collapse of the Soviet Union, the Central Asian states have shifted their role from a mere political backyard into new international entities. Their strategic geographic position as the fulcrum of Eurasia has also positioned them as the crossroads between East and West. Consequently, Central Asia is regarded as fertile soil for power contests between major political powers. Currently, there are three noticeable powers playing the so-called Great Game: the United States, Russia, and China. All three countries regard Central Asia as an important region.
For Russia, Central Asia contains nostalgic value as the former Soviet political sphere. More than that, the Central Asian states are home to millions of ethnic Russians, with the Russian language also remaining widely spoken. For the newly-emerging China, a Chinese presence in Central Asian states is important to balance the influence of Russia. China has also expressed its ambition to embrace Central Asia in the creation of the new Silk Road between Europe and Asia. Lastly, for the United States the region is a potential trading partner as well as the last frontier to combat terrorism coming from Afghanistan.
How will the election of Donald Trump affect the balance of power in the region? In order to measure the impacts of Trump’s ascent to power on Central Asia, we also need to examine the relations of the United States with Russia and China.
The post-Cold War relations between Russia and the United States were quite lukewarm until the first decade of the 21st century. However, with Russia once again rising, the relationship has been plagued by oscillations that often resemble the legacy of Cold War animosity. However, it is apparent that relations between Washington and Moscow will be facing a new stage following the election of Trump as president. Russian President Vladimir Putin is widely known as a supporter of Trump and was among the first world leaders to congratulate Trump on his triumph. Commenting on his relations with his prospective American counterpart, Putin said he was hoping to “restore fully fledged relations with the United States.” On the other hand, Trump has also indicated his intention to normalize relations between the United States and Russia.
For Central Asia, lowering tension between the United States and Russia can also mean a regional inclination toward Russia. With Trump in charge, the United States will be less likely to perceive Russia as a challenger. Therefore, Washington will be less motivated to devote too many resources toward limiting Russia’s presence in Central Asia. Russia also benefited from the death of Uzbekistan’s president, Islam Karimov. Under Karimov, Uzbekistan, the most populous state in Central Asia, had tried to shift away from Russia’s influence. With Karimov’s demise, the new leader will probably to look to Russia as Uzbekistan’s traditional patron.
Moreover, it is also possible that Trump will take a first step in moving away from Obama’s foreign policy by withdrawing the American troops from Afghanistan. With military presence often regarded as a signifier of influence, a planned withdrawal could be interpreted as the withdrawal of American power in the region. Nonetheless, a complete U.S. withdrawal could also mean a new security problem for Central Asia and its neighbors. Once American troops are removed from Afghanistan, the Taliban might gain strength and power, at the expense of security in some Central Asian countries such as Turkmenistan, Uzbekistan, and Tajikistan. In this case, Russia will need to fill the void in order to securitize the region.
While the relations between Washington and Moscow look set to move toward an optimistic path, we also need to be aware of the ties between the United States and China under Trump. During his campaign, Trump asserted a strong stance toward China, such as pledging to name China a “currency manipulator.” A well-known business person, Trump’s foreign policy toward Central Asia will possibly more concerned with building a strong economic network with Central Asian states. Accordingly, he may observe the increasing economic involvement of China in Central Asia as a threat. Washington and Beijing need to work together more closely in order to prevent possible trade wars, which could grow into more escalated conflicts.
With this in mind, Central Asia can also serve as a fertile soil for cooperation between the United States and China. Currently, both China and the United States have a shared interest in limiting terrorism in the region. While China is mainly concerned about the emergence of Xinjiang separatists, the United States is also working to contain the Taliban from spreading any further.
The world is waiting to see what policies the newly-elected superpower leader will implement in his new administration. For Central Asia, this could also mean a shift in the great power constellation surrounding the region.
Source: The Diplomat

Caspian Energy Grid (CEG) - a Plan B for the region   Since my mother is an Azeri, Azerbaijan ...

Top German MEP joins foes of controversial Nord Stream 2 pipeline The head of the largest party in the European Parliament ...